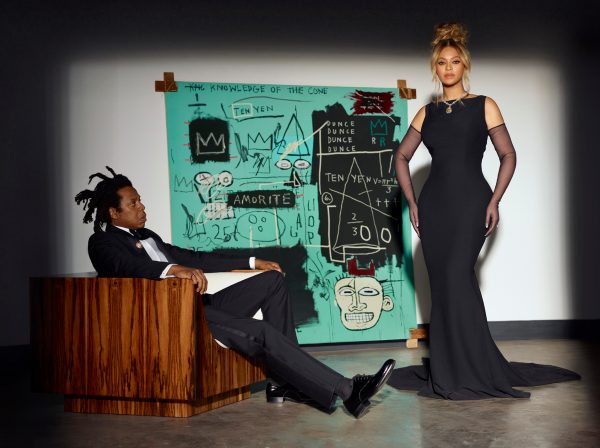 UNITED STATES — Almost two weeks ago, D.M. Fashion Book reported that Beyoncé and Jay Z are the latest faces for American jeweler Tiffany & Co. (see it here). When we first confirmed the news, we also said that they will appear in the next ad campaign for the iconic jeweler, which is now owned by LVMH Moet Hennessy Louis Vuitton.

The Mason Poole photographed advertisement was just released and it feature a never-before-seen painting by Jean-Michel Basquiat in the jeweler’s signature robin egg blue. Styling was courtesy of June Ambrose and Marni Senofonte, dressing Beyoncé and Jay Z in Givenchy.

Tiffany recently acquired the spectacular artwork, which had been in the possession of a private collector since the early 1980s. The full campaign is to break in print next month.

Tiffany is putting a lot of marketing dollars behind the yearlong campaign featuring the Carters, which includes a short film that depicts Beyoncé singing “Moon River” to her husband. It’s destined for major exposure in the coming months, including a takeover of all the digital billboards in New York’s Times Square.

The images were first revealed in WWD by Alexandre Arnault, Tiffany’s executive vice president of products and communications. He also told the back story of the project in his first sit-down interview since joining the historic New York jeweler last January.

It’s also tantamount to a record release, with Beyoncé debuting her own interpretation and arrangement of the famous song from the 1961 movie “Breakfast at Tiffany’s” as Jay-Z filmed her with a Super 8 camera. For the film, she conscripted director Emmanuel Adjei, the co-director and creative collaborator of Beyoncé’s acclaimed musical film “Black Is King.”

Meanwhile, the Basquiat painting, dating from 1982 and titled “Equals Pi,” ties a neat ribbon around a spectacular talent package, being a legendary New York artist that the Carters also admire, relate to — and collect.

“We don’t have any literature that says he made the painting for Tiffany,” Arnault related over Zoom. “But we know a little bit about Basquiat. We know his family. We did an exhibition of his work at the Louis Vuitton Foundation a few years back. We know he loved New York, and that he loved luxury and he loved jewelry. My guess is that the [blue painting] is not by chance. The color is so specific that it has to be some kind of homage.”

“As you can see, there is zero Tiffany blue in the campaign other than the painting,” he added, noting that the artwork will ultimately take up permanent residence in Tiffany’s flagship boutique on New York City’s Fifth Avenue “It’s a way to modernize Tiffany blue.”

The campaign featuring the Carters is also serving to further renovate Tiffany’s image, with Arnault touting modernity and inclusivity among the overarching ideas he’s introducing — along with daring. It reflects LVMH’s renowned expertise in supercharging heritage brands by blending history and the zeitgeist.

While acknowledging that Tiffany is a large brand that speaks to many different audiences, and markets a diverse array of products priced anywhere from $300 to $3 million, Arnault said the Carter campaign reclaims the company’s roots as a high jeweler, while giving more hints about where LVMH plans to take the company.

And what sparks this triangle produced.

“We’ve shared the film with a few people in the company, and they had tears in their eyes. They work for Tiffany’s so it’s biased, but still,” he mused.

Arnault said he pitched the idea to Jay Z at the top of the year, reckoning that the campaign would surface as the world emerges from the worst of the coronavirus pandemic, providing a message of hope and a story built around New York, Basquiat and his marriage with Beyoncé.

“We at Tiffany stand for many things, love being at the forefront…. And they embody modern love, in my opinion,” Arnault said, mentioning their nearly two decades together, their sometimes public “ups and downs” — and their prolific, unprecedented careers, ranging from Beyoncé’s Ivy Park activewear line with adidas to Jay-Z’s recent partnership with LVMH to market Ace of Spades Champagne. “If you think about iconic power couples in the world, they are number one, at least in my mind. It’s a really proud moment for everyone at Tiffany.”

“We wanted them to be seen as no one has ever seen them before. We wanted to go behind the scenes and try to capture those intimate moments that are so difficult to see and find,” he continued. “You’ll see the magic of them loving each other. It’s quite incredible. Also, their daughter was on set and she appears in one of the videos. You see the special bond that they all have together, which is amazing.”

Called “About Love,” the print campaign is to break on Sept. 2 in Harper’s Bazaar U.K. before appearing in other global publications. The accompanying video is to debut on Sept. 15 on tiffany.com as well as key outdoor locations, digital platforms and broadcast outlets. Major takeovers including Times Square and Grand Central in New York City, plus iconic locations in Paris, Tokyo, Shanghai and London, are to unfurl through the fourth quarter.

Arnault declined to say how much Tiffany is investing in the campaign around the Carters.

“The investment will be pretty impressive,” he demurred. “It’s our biggest campaign for the year. It’s the most enduring campaign. Also, it’s the only year-long campaign that we have. It marks a clear evolution of what we’ve been doing from a creative standpoint.”

As part of the partnership with the couple, Tiffany is committing $2 million for scholarship and internship programs for Historically Black Colleges and Universities. “This commitment reflects Tiffany’s continued support toward the advancement of underrepresented communities,” Arnault said. “The Carters have already done incredible work in this space. Together, we are excited to embark upon this journey.”

The video and print campaign were realized at the Orum House — an ultramodern, glass-clad home in Los Angeles — with dreamlike, nostalgic flashbacks interwoven.

Besides the Tiffany Diamond, which cemented the brand’s reputation as a diamond authority, the campaign also features midcentury designs by Jean Schlumberger, including his iconic Bird on a Rock brooch from 1956, reconfigured for the shoot as a pair of one-of-a-kind cuff links for Jay Z, who also wears a Tiffany engagement ring on his pinkie finger. Some items from the Tiffany T collection are featured, though the eye goes to all the big rocks.

“We wanted this campaign to showcase the highest jewelry that we have, in order to set in people’s minds that this is who we are at our heart,” Arnault said. “We are a high jewelry company. We have extraordinary pieces that are handcrafted by artisans around the world, using the most incredible stones. And putting those products in this campaign is a way for us to remind the public that this is who we are. Putting those products on the Carters is also a way for us to say that we partner with the best, by giving them the best that we have.” 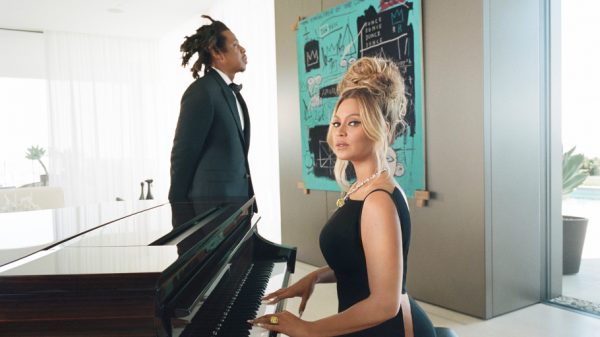 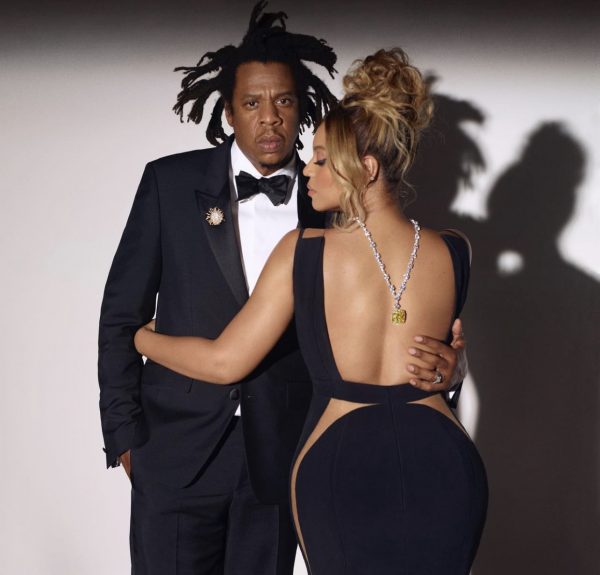 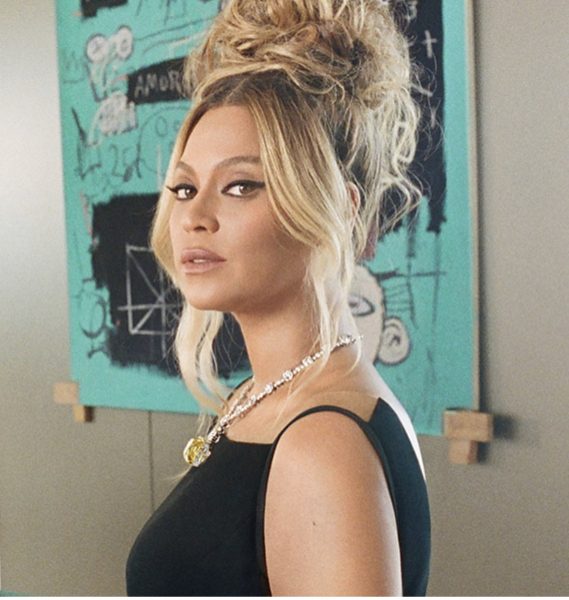 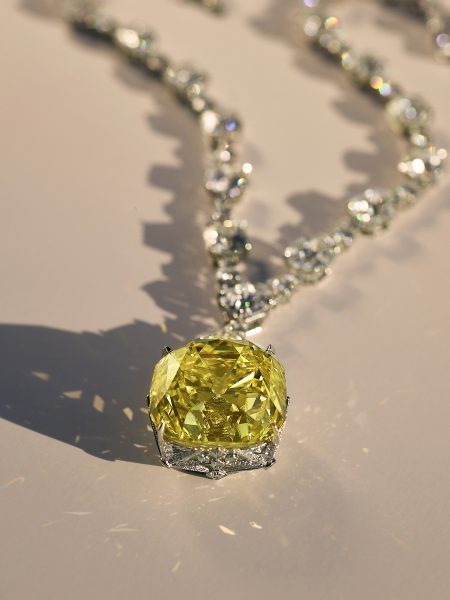