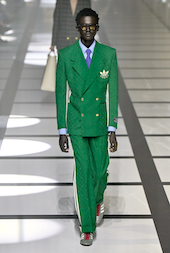 MILAN, ITALY — There is a major shakeup taking place at Gucci!

The luxury Italian house and parent company Kering on said Alessandro Michele would be exiting the brand, relinquishing his role as creative director.

“I was fortunate to have had the opportunity to meet Alessandro at the end of 2014, since then we have had the pleasure to work closely together as Gucci has charted its successful path over these last eight years,” said Gucci president and CEO Marco Bizzarri in a statement. “I would like to thank him for his 20 years of commitment to Gucci and for his vision, devotion and unconditional love for this unique house during his tenure as creative director.”

François-Henri Pinault, chairman and CEO of Kering, said: “The road that Gucci and Alessandro walked together over the past years is unique and will remain as an outstanding moment in the history of the House. I am grateful to Alessandro for bringing so much of himself in this adventure. His passion, his imagination, his ingenuity and his culture put Gucci center stage, where its place is. I wish him a great next chapter in his creative journey.”

In 2015, Michele, was appointed to the top creative role and in a statement he said, “there are times when paths part ways because of the different perspectives each one of us may have. Today an extraordinary journey ends for me, lasting more than 20 years, within a company to which I have tirelessly dedicated all my love and creative passion. During this long period, Gucci has been my home, my adopted family. To this extended family, to all the individuals who have looked after and supported it, I send my most sincere thanks, my biggest and most heartfelt embrace. Together with them I have wished, dreamed, imagined. Without them, none of what I have built would have been possible. To them goes my most sincerest wish: may you continue to cultivate your dreams, the subtle and intangible matter that makes life worth living. May you continue to nourish yourselves with poetic and inclusive imagery, remaining faithful to your values. May you always live by your passions, propelled by the wind of freedom.”

Michele joined Gucci in 2002, following a stint as senior accessories designer at Fendi and became former creative director Frida Giannini‘s deputy in 2011 when he took over the leather goods, shoes, jewelry, and home collections. In 2014 he took on the additional responsibility of creative director of Richard Ginori, the porcelain brand acquired by Gucci in 2013.

With his unique style, Michele, engineered the brand’s turnaround. Gucci said the company’s design office “will continue to carry the direction of the house forward until a new creative organization will be announced.”

Could Remo Macco, a Gucci veteran who was recently appointed studio design director, be Michele‘s successor? He has been tasked with offering more commercial products to balance Michele’s aesthetics.

“There has been an increasingly strong divide between the show team and the merchandising and commercial studio,” said a source, adding that Macco has acted as “a filter between all the directors of the different categories and Michele,” as Gucci has increased the number of capsule collections and special editions.

Another potential candidate could be Davide Renne, also a Gucci veteran.

Another sign of a sharper focus on boosting the top line and a change of direction may be seen in the appointment last spring of former Roger Vivier brand manager Maria Cristina Lomanto. She was named  executive vice president, brand general manager, a new role for the luxury company. Lomanto was tasked with focusing on coordinating collection and retail merchandising, visual merchandising, beauty and eyewear licensing and retail training, reporting to Bizzarri.

As reported by WWD, sources say that Michele was asked “to initiate a strong design shift” to light the fire under Gucci, but this request was apparently not met by the designer, whose quirky aesthetic is very specific. Michele has helped boost Gucci’s influence in fashion, and his gender-fluid and romantic spirit has left its mark on a slew of other designers, catering to a younger and more diverse customer, but, according to one source, “Pinault has been trying to recover the uber luxury consumer.”

It is unclear what the future holds for Michele, who has expressed his passion for cinematography – much like Ford – but one source speculated the designer “could be receiving a phone call from Pinault’s arch rival Bernard Arnault any time soon.”