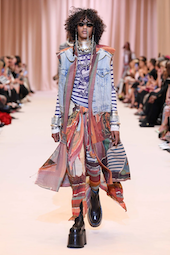 PARIS, FRANCE — Fashion designer Haider Ackermann — prized for his soigné tailoring, sophisticated color sense and artful dishabille — will be the next guest designer to do a one-off haute couture collection for Jean Paul Gaultier, which was first reported by WWD.

It is to be unveiled during Paris Couture Week in January for the spring 2023 season.

“I’ve always loved Haider’s work, especially on the tailoring,” Gaultier told WWD. “I am certain that his couture will be remarkable, and I cannot wait to discover the collection that he will present.”

Balmain’s Olivier Rousteing; Glenn Martens, of Y/Project and Diesel, and Chitose Abe of Sacai were the first three talents invited to guest-design a Gaultier couture collection following the founder’s retirement from the runway in 2020.

The idea of different designers interpreting one couture brand first came to Gaultier in the ’90s when one Paris house “found itself without a designer,” according to Gaultier, who has never named names, though the house in question is believed to be Jean Patou, famously ignited by Christian Lacroix in the ’80s. (Gaultier also worked at Patou earlier in his career.)

Ackermann described the project as a fantasy fulfilled on several levels.

“If one follows fashion, you follow Jean Paul Gaultier,” he said. “I have enormous respect for how progressive and avant-garde his work has always been. He has always pushed the envelope in culture and society as a whole, above and beyond fashion“.

“To approach haute couture has always been my dream, and now being the guest of the Jean Paul Gaultier haute couture house is an immense honor that I fully embrace,” he added.

The Colombian-born, Paris-based Ackermann is a graduate of fashion at Antwerp’s Royal Academy of Fine Arts and started his signature label in 2003. His upbringing in countries including Chad, Ethiopia, Algeria, The Netherlands, Belgium and France has fed his eclectic, globe-trotting style. He served as Berluti’s creative director from 2016 to 2018  (see it here).

He will continue creating his signature collections for women and men, usually a highlight of Paris Fashion Week.