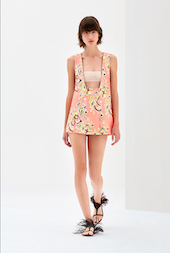 Emilio Pucci Will Travel To St. Moritz For Its Next Fashion ‘Experience’ SWITZERLAND — Emilio Pucci is temporary stepping away from its beach holidays to uproots in the mountains for its next fashion “experience”.

The Florentine house will bring its next event in the ski slopes of St. Moritz.

A fashion “experience” has been scheduled for Dec. 8 to 10 at the luxury Swiss ski destination.

“The main idea is to emphasize the position of Pucci for wintertime,” said artistic director Camille Miceli, who unveiled her first designs for the storied Italian brand last April in Capri, the jet-set island where founder Emilio Pucci opened his initial boutique in 1951.

Pucci, who died in 1992, was known for his athletic prowess and was a member of the Italian Olympic ski team in 1932. In fact, he was “discovered” as a designer while skiing and by chance met fashion photographer Toni Frissell, who asked to photograph his ski outfit. As legend goes, when she discovered he had personally designed the collection, she asked him to make some women’s skiwear, which was later shown in Harper’s Bazaar, and a career was born.

He began designing skiwear out of jersey fabrics in 1947 and opened his house in 1949, which quickly became famous for colorful, graphic motifs.

Miceli said she prefers to “show things in a different way and surprise people. We are a resort and lifestyle brand: We show the clothes in a context.”

Camille Miceli is a seasoned creative who has worked in the design departments of LVMH‘s Dior and Louis Vuitton. She started her career in public relations, going on to work in the studio with some of the most acclaimed fashion designers in the world, including Karl Lagerfeld, Azzedine Alaïa, Marc Jacobs and Nicolas Ghesquière.

She has expressed a wish to show the joyful side of Emilio Pucci, which is strongly associated with summer getaways and winter pursuits, too. “It’s more about lifestyle, a way of living that inspires me the most,” she told WWD earlier this year.

Pucci also unveils collections on a see now, buy now calendar, with deliveries timed as monthly drops. The company, controlled by French luxury giant LVMH Moët Hennessy Louis Vuitton, recently rebooted as a resort-focused brand, with Miceli characterizing her clothes as easy to wear, easy to pack and versatile enough to take a woman from “morning to night.”

She said the collection to be unveiled in St. Moritz would include party dresses and gift items, given that its timed to the holiday season, along with ski and resort elements.

Miceli noted that St. Moritz, while in Switzerland, has a strong Italian flavor, given its proximity to Milan, Como and Bergamo.