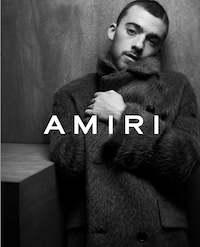 THE AD CAMPAIGN WAS LENSED IN LOS ANGELES, BY PHOTOGRAPHER KARIM SADLI, WITH CREATIVE DIRECTION FROM JONNY LU.

In the inaugural campaign, the Euphoria star is seen in a carousel of artistic portraits, with a setting inspired by a modernist design and lighting and composition techniques.

The 23-year-old, best known for his breakout role in HBO’s hit series Euphoria, is lensed wearing an array of classic looks from Amiri’s collection, including a faux fur jacket and the brand’s signature kick-flare tailoring and distinctive Americana silhouettes.

The brand’s owner and creative director Mike Amiri chose Cloud because his passion and artistry resonates with his own. “Following a swift rise informed by his acclaimed, breakout role in ‘Euphoria,’ the actor now stands at the vanguard of a new generation of American talent driven by boundary-free creativity and art,” the brand said in a statement. “It’s these characteristics that not only appeal to Mike Amiri, but also mirror his own steadfast attitude.”

Cloud attended the School of Production Design at Oakland School for the Arts, where he was a classmate of his Euphoria co-star Zendaya. While working at Woodland restaurant close to Barclays Center in Brooklyn, Angus was scouted by Euphoria casting director Jennifer Venditti. Cloud also premiered in the skate movie, North Hollywood as the character Walker.

Since getting his role in Euphoria, Cloud has risen to fame in both entertainment and fashion. This year alone he has worked closely with Ralph Lauren, attending the label’s shows and featuring in a fragrance campaign, as well as Coach, sitting front row for its fall 2022 show.