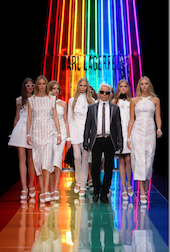 THE APPAREL COMPANY WILL ACQUIRE 81% OF THE COMPANY FOR 200 MILLION EUROS.

NEW YORK, UNITED STATES — American clothing group G-III Apparel Group Ltd. has agreed to buy the 81 percent of the Karl Lagerfeld fashion brand it doesn’t already own for 200 million euros. Investors were keen on the deal and sent shares of G-III up 5.5 percent to $27.93 on Monday.

Pier Paolo Righi, who has served as a custodian of sorts for the late designer’s legend and image, will continue to lead the brand as chief executive officer.

G-III considers Karl Lagerfeld one of its five “global power brands” — alongside DKNY and Donna Karan, which the company also owns, and Calvin Klein and Tommy Hilfiger, produced under license with PVH Corp.

In addition to consolidating control of Karl Lagerfeld, the deal will give G-III more scale in Europe, where the firm has an established business with Vilebrequin and is still building with Sonia Rykiel, which was acquired last fall (see it here).

Morris Goldfarb, chairman and CEO of G-III, told WWD in a joint interview with Righi: “My mission is to integrate the European assets somewhat as a conglomerate that at the top holds the initiative for these very special brands.”

“We have a pretty strong foundation,” he said. “We’re going to have a platform that in Europe alone approaches half-a-billion [euros] of wholesale sales.”

In addition to strengthening G-III’s global push, a European platform consisting of Karl Lagerfeld, Vilebrequin and Sonia Rykiel will also have more of a luxe slant than much of G-III’s bread-and-butter business in the U.S.

And Goldfarb is building the operation with that in mind.

“We’re not taking the talent pool that we have in North America, which is led by myself and some amazing merchants, and transporting it to Europe,” the CEO said. “Europe is Europe and North America is North America. We know our strengths and our strength [in North America] is the middle market, the Macy’s, the Dillard’s, the Belks, the Nordstroms of the world.”

A big part of building in Europe will be building Karl Lagerfeld, which Goldfarb said G-III is prepared to do.

He stressed the importance of “having full-time, not private equity investors, someone who is strategic and really understands the need to invest in the future of the company to a greater degree than the stakeholders of yesterday did. I think you’ll see an aggressive change.”

G-III logged $175 million in Karl Lagerfeld revenues on its books last year, just under half of the brand’s total revenues, which tallied about $375 million last year.

That has G-III looking to more than double the business to roughly $1 billion, or more than $2 billion at retail.

The brand, which G-III touts as “driven by endless curiosity, a passion for collaboration, and the infinite possibilities of creative expression,” is based around ready-to-wear and accessories, but also encompasses footwear, eyewear, fragrance and more. Sustainability is also a cornerstone.

In addition to wholesale distribution around the world, there are about about 120 mono-brand stores, operated by the brand or partners, with key outposts in Paris, London, Berlin, Dubai and Shanghai.

Karl Lagerfeld has logged a compound annual growth rate of 30 percent over the past five years, and with an increase north of 40 percent last year, and Righi plans to keep going higher.

“The potential is immense to get to double what we have created so far,” Righi said.

Now having one strategic partner and investor with a long-term view, and an entrepreneurial approach, will help accelerate its development across categories and geographies, he said, also lauding G-III’s competency in consumer data.

Among imminent expansion vectors for the brand are Karl Jeans, launching later this year, initially as a direct-to-consumer play with online distribution, and swimwear, also due out in 2022.

In terms of international development, Righi said he spies a lot of potential in Asia, not only in China, where it has a joint venture, but also in Japan and Korea.

Since Lagerfeld died in February 2019, the company has sought continuity and brought on renowned stylist and editor Carine Roitfeld, who worked with the designer on campaigns, as style adviser. She works in tandem with design director Hun Kim, who had been handpicked by Lagerfeld and has been working quietly behind the scenes since August 2015.

Other longtime collaborators of the acclaimed designer remain with the company, including his communications director Caroline Lebar and Sébastien Jondeau, who segued from being Lagerfeld’s bodyguard, confidante and personal secretary to a key brand ambassador and product consultant for the men’s part of the business.

G-III, initially Karl Lagerfeld’s joint-venture partner for its push into North America, took a 19 percent stake in Karl Lagerfeld Group BV in February 2016 via a capital increase intended to speed its global development.

That venture, forged in 2015, was for a new Karl Lagerfeld Paris range, initially focused on women’s apparel and handbags, plus men’s outerwear — all positioned in the burgeoning “affordable luxury” category and tailor-made for the North American market.

G-III held a 49 percent interest in the JV and became Lagerfeld’s first licensee, securing a renewable five-year pact for the initial categories. The deal covered all consumer products and apparel in the U.S. and Canada, excepting those held by Karl Lagerfeld Group: eyewear, fragrance, watches, jewelry and hospitality services. It also granted an exclusive, royalty-free license to use the trademarks in Mexico for the same products.

Righi was introduced to G-III as a proven partner of PVH, which in 2014 became a minority shareholder in the parent company of the Karl Lagerfeld brand. (The Karl Lagerfeld company, previously owned by Tommy Hilfiger, was not part of the deal in 2010 that saw Hilfiger’s company acquired by Phillips-Van Heusen, now PVH.) The shareholders selling to G-III included a group of public and private investors led by Fred Gehring of Amlon Capital, fashion backer Silas Chou, and private equity fund Apax Partners.

Relaunched by Apax in 2011, the Karl Lagerfeld brand initially focused on online selling, eventually layering on boutiques around the world.

Goldfarb and Righi described Lagerfeld as a powerhouse of wit, creativity and curiosity, whose pertinence hasn’t dimmed.

“I just had 15 minutes with Karl and that stays with me forever,” Goldfarb marveled.

Righi noted that Lagerfeld’s creative universe went far behind fashion, and “how Karl looked at the world resonates very strongly with people.”

The all-cash transaction has been given the thumbs-up by the boards of both companies and is expected to close in the second or third quarter this year.