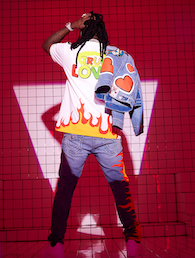 U.S.A. — Could you believe that it been a decade since Chief Keef dropped “True Religion Fein” over a Young Chop instrumental? The track originally appeared on his 2012 mixtape Back From the Dead. On the cover of the tape, when he was just 16 at the time, Keef posed in a V-neck T-shirt with the brand’s horseshoe logo stamped on the chest and he wore their signature denim in videos.

10 years later, the Chicago drill rapper is designing a collection for True Religion.

The collection consists of denim jackets, jeans, T-shirts, and loungewear like sweatpants and hoodies. They gave each item a unique flare with details including flames, cartoon skulls, hearts, and phrases like “TRUEEE” running up pant legs in colorful bubble letters. The pieces may look familiar to his solo clothing lines Glo Gang and recently launched Bad Weather. Keef designed his entire True Religion collection.

The 26-year-old talked to the folks over at Complex about designing for the California-based company.

“It’s always been a dream to work with True Religion since back when I made the song,” says Chief Keef when speaking to Complex over the phone about the upcoming release slated to hit True Religion’s web store on May 5. While discussing the upcoming collab, he said, “I told them I started designing and wanted to do a collab and work on some stuff. And they was down to let me do it. They gave me full creativity to do it all. I just went to work.”

“We really look at True Religion as this blank canvas. We hand our brand over for other people to interpret it and see it through their lens. It was amazing to have Chief Keef look at it through his lens,” says True Religion creative director Zihaad Wells.  “We’ve just become synonymous. You think Chief Keef, you think True Religion.”

Head over to Complex to read the full interview.