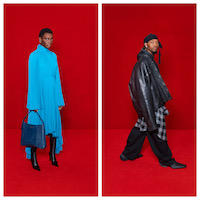 Balenciaga Will Present Spring 2023 Collection In NYC On May 22 THE LUXURY FRENCH HOUSE CHANGED THE DATE FROM MAY 21ST TO THE 22ND.

NEW YORK, UNITED STATES — Just a few weeks before Balenciaga presents their spring 2023 collection, the label changed the date of its upcoming show.

It had previously announced Saturday, May 21, for its itinerant showing in the U.S. The Paris-based fashion house, controlled by French luxury group Kering, typically occupies a late Sunday morning slot when it takes part in Paris Fashion Week.

At the time of this post, other details, including the venue, are still under wraps.

The house’s New York showing is bound to be an eye catcher, given its creative director Demna Gvasalia’s reputation for mounting immersive and gripping fashion spectacles.

The designer is known for fearless and incisive commentary on the climate crisis, the perils of technology, the geopolitical situation — and fashion itself.

He also continues to have a broad impact on fashion. Last July, he staged Balenciaga’s first couture show since Cristóbal Balenciaga retired from fashion in 1968, and his strong-shouldered tailoring foreshadowed a glut of dark pantsuits in an array of fall 2022 collections.