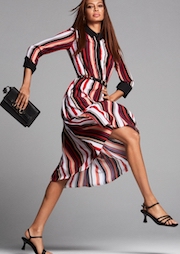 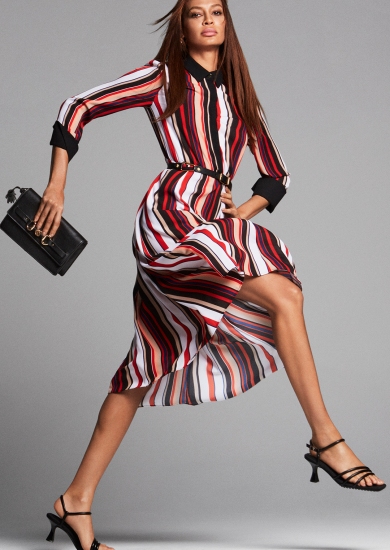 The advertisement was lensed by photographer Daniel Jackson in New York.

The brand will introduce its spring campaign during New York Fashion Week on Friday at 9 a.m. Smalls will appear in the collection’s look book and video presentation on CFDA’s Runway 360 digital platform, and the collection, entitled “See It Now, Buy It Now,” will be available to purchase on Anne Klein’s e-commerce site.

Smalls is the first featured talent in Anne Klein’s multiyear campaign that will showcase dynamic women each season. The consumer campaign will be an ongoing series of portraits and profiles of notable women who are creating change using their public platforms. Each woman presented will be featured in print, video and digitally, ranging from consumer advertising to Instagram Reels, showcasing their efforts in raising awareness for organizations and causes.

“We are excited to have Joan Smalls showcase  the brand this season as she exemplifies the multifaceted empowered woman Anne Klein serves,” said Effy Zinkin, chief operating officer of WHP Global, owner of the Anne Klein brand. “Joan’s work in the fashion community and beyond embodies Anne Klein’s vision and we look forward to working with her to further support charitable endeavors.”

Smalls donated 50 percent of her wages in the second half of 2020 to charitable causes via DonateMyWage, and in 2021 helped launch the #ChangeFashion initiative dedicated to eradicating racism in the fashion industry. Born and raised in Puerto Rico, Smalls will join Anne Klein and a retail partner on another charitable initiative to be revealed soon.