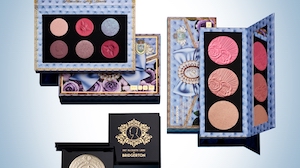 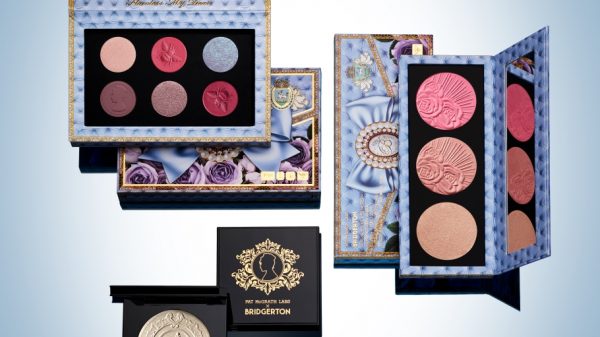 LONDON, UK — Pat McGrath‘s beauty operation of makeup, Pat McGrath Labs has announced another collaboration. This time around, the beauty mogul is adding Netflix to her forever growing resume.

In the past, McGrath’s namesake line, Pat McGrath Labs collaborated with streetwear brand Supreme (see it here) and Star Wars.

Pat McGrath is no stranger to the instantaneous success of buzzy marketing collaborations.

Pat McGrath Labs, is collaborating with Netflix on an homage to the first season of Bridgerton. Simply called Bridgerton x Pat McGrath Labs, the drop will consist of one eye palette, one blush trio and two highlighters. Prices for the products range from $55 to $65, and they will be available in limited quantities on Pat McGrath Labs’ website on December 26, 2021.

In the first season of the show, over 82 million households streamed Bridgerton. The show also shattered Netflix viewership at the time and McGrath herself wasn’t immune to it. “It was like being transported and the whole world felt it, over 80 million households viewed it,” McGrath told WWD via Zoom. “With this launch, we really wanted to celebrate the anniversary of that.” It was renewed for a second season this past January.

The brand’s past collaborations had really “resonated with the public and it was an insane success,” McGrath said, noting that she still gets inquiries asking her for spare tubes of her lipstick with Supreme that sold out in seconds.

McGrath’s criteria for collaboration, though, go beyond sales. She draws on a wide cultural lexicon for inspiration — she used to famously travel with multiple suitcases of books on fashion, beauty and cultural eras — and said the show’s subversions of costume drama archetypes reminded her of her own creative M.O.

“Working with period costume and mixing that whole whole idea and time period has always been an obsession — I love mixing time periods, decades and it felt really light. It was sumptuous, like with the use of modern music, and the inclusivity was spectacular. It was beyond creative. And it felt like for us at Labs, we could really have fun, and twist and play,” she added.

With that in mind, McGrath combined more contemporary references when ideating her project. “Again, I love to tie in the idea of playing with the Regency [period], playing with the sumptuousness but then also adding in a little bit of New Romantics, adding in the world that I’m obsessed with as well,” she said. “It’s going to be fun to see a juxtaposition between my world, and even parts of punk.”

For the eyeshadow palette, called Diamond of the First Water, McGrath turned to her own past works for guidance. The pigments, which range from fuschia and pink to electric blue, were inspired by a 2005 story in Vogue Italia that McGrath worked on with Steven Meisel.

McGrath also tapped Ava Phillippe, daughter of Reese Witherspoon and Ryan Phillippe, for the campaign. A spokesperson for the brand said that it would be Phillippe’s first with a makeup brand.

“She looks exquisite — like a modern debutante, strong with pink hair,” McGrath said. “Ava has always liked my Instagram posts, she was always into the inspirations, so I, one day, left her a message in her DMs. A light went off in my head and I knew I would see her soon. She was with us within a week shooting the campaign with a bunch of cool, genius kids,” she said.

The show, McGrath said, had inquired about collaborations for a year before she agreed to take it on. “It was amazing to see how Shonda [Rhimes, executive producer of “Bridgerton”] modernized the whole show,” she said.

“When I think about the amount of creativity that you can bring to working on a period drama, and also the thought of being able to modernize it through Labs is a really exciting factor,” she continued.

McGrath may have started her career in fashion — “Fashion is an amazing inspiration, you’re always challenged in the way that you’re working every day within fashion,” she said — but broadening her horizons has allowed her to think unconventionally about her product pipeline.