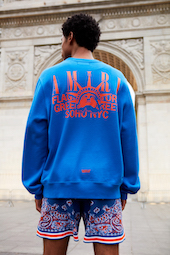 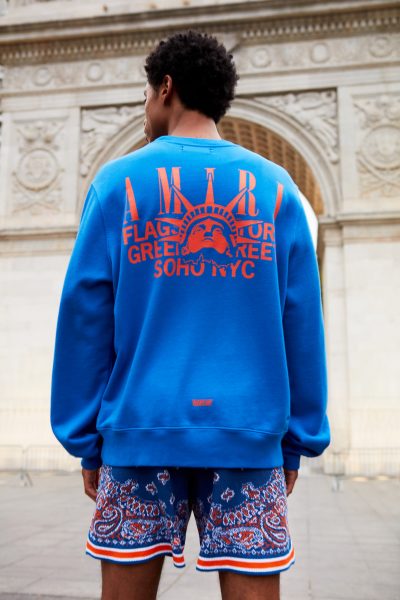 UNITED STATES — Los Angeles -based luxury label Amiri, which was founded in 2014 by Mike Amiri revealed that he’s opening two stores this month in New York and Las Vegas.

The L.A.-based designer opened his first store in his hometown last September: a 2,200-square-foot flagship on Rodeo Drive in Beverly Hills. In the Big Apple, he will open a 2,106-square-foot store at 76 Greene Street in SoHo on Saturday. That will be followed on Sept. 30 with an 1,840-square-foot boutique at the Wynn resort in Las Vegas. He also filmed his spring 2022 runway show in Vegas earlier this month.

The label is known for its distressed denim jeans, hoodies and pricey tees.

The successful designer and savvy businessman was just nominated as Menswear Designer of the Year by the Council of Fashion Designers of America.

In an interview with WWD, Amiri said since opening, the L.A. store has performed “really well — it’s one of the top-performing stores on the street and is exceeding projections.”

But even before that store opened, he had been formulating plans for expanding his retail footprint.

“It was always part of the plan,” he said. But he wanted to ensure his wholesale business was firmly established before opening retail stores. Now that his brand is part of the mix at Bergdorf Goodman, Neiman Marcus, Saks Fifth Avenue, Ssense, Browns, Galeries Lafayette, Harrods, Lane Crawford, The Webster and others, it was time to turn his attention to his own retail.

Amiri said, L.A. had to be first, because it’s where he’s headquartered and where he grew up.

But New York had to be next. “For a brand connected to L.A. and the West Coast, we had to plant our flag here first,” he said. “But our strongest customer base is in New York.”

The New York store will have a similar aesthetic to the L.A. flagship, but tweaked to be appropriate to the neighborhood. “In Beverly Hills, there’s a laid-back West Coast feeling, like you’re in someone’s home,” he said. “New York is more raw. We’ll preserve that but bring in an Amiri touch.”

The entrance on Greene Street will retain the building’s original white brick facade and inside, it will speak to SoHo’s artistic history with a gallery-like atmosphere with fluted concrete walls, brushed stainless-steel rails and solid wood shelving and podiums.

The interior designer for New York and Vegas is Katherine Waronker, and Kamp Studios is doing the finishes, plaster and hand-detail work in SoHo.

As with the L.A. location, the collection will be merchandised alongside “unique and collectible” pieces of art and furniture “to make it feel like a gallery,” Amiri said. That will include a commissioned, site-specific artwork by L.A. artist Wes Lang called Blood ‘38.

The store will also be decorated with California flora to bring a bit of a West Coast sensibility to the location.

“I like seeing the collection in that atmosphere, it feels more special,” Amiri said.

The store will also stock limited-edition products exclusive to New York. For example, the store’s address becomes a graphic logo interspersed with Statue of Liberty iconography.

As for Vegas, Amiri said during the pandemic, it was the perfect “escapist location” for Californians looking for someplace close to visit, which is why he decided to not only film his digital runway show there, but also lease a spot at the Wynn property.

That store will also be designed specifically for that city with large white marble panels on the facade alongside floor-to-ceiling windows framed in walnut wood. Inside, the store will feature concrete or large-scale ceramic tile floors, concrete wall panels, geometric marble fixtures and carved solid wood tables. The couches and soft furnishings here were also curated by Amiri to create lounge areas and there will be two commissioned, site-specific artworks by L.A. artist Wes Lang titled “The Dream Part 1” and “The Dream Part 2.” The mix will include several Vegas-specific pieces incorporating casino dice and playing cards on limited-edition jersey pieces.

In 2019, we reported that OTB Group‘s President Renzo Rosso brought a minority stake in Amiri through his OTB holding company, Il Sole 24 Ore (see it here).