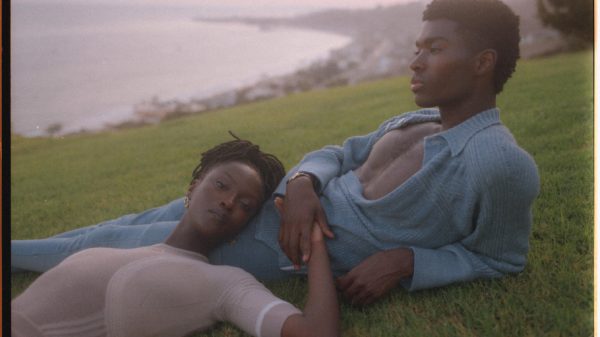 “The idea is to bring a fresh approach to knitwear, preserving the necessary elements of the perfect knit while exacting our own vision. I adore clothing that combines sophistication and comfort.” Jean–Pierre told WWD. “They’re designed to define modern classics, with subtle flourishes tempered by timeless polish and comfort. It’s for the customer who indulges in the kind of sweater that pairs as effortlessly with tailored pieces during the week as it does with denim for a crisp weekend day.”

Following the 2019 Met Gala, where Jean-Pierre was introduced to creative director Alessandro Michele’s design team, Azede Powered by Gucci, a “part of Gucci’s continued efforts to foster independent young talents in the industry,” was soon born.

The Azede Powered by Gucci selection of pieces is made up of five key styles, which Jean-Pierre described as “cozy classics reinvented, reined pieces you’ll reach for from fall to spring.” Known for her meticulous craftsmanship, innovative technology, and comfort in casual dress, the assortment includes a bodysuit, gender-neutral shirtdress, “coatigan” and skirt, as well as Jean-Pierre’s personal favorite: a sculpted pant.

“Jeans, which of course are not jeans at all; they’re knits engineered to have that tailored relaxed look with none of the discomfort (or environmental harm) of denim. Made in extra-fine merino wool, these are the pairs that you will want to live in: ones you can wear to a party, on the couch, or on a jog.”

Jean-Pierre and her team interpreted each design from sketches into drapes, constructed initial samples, and chose each of the finely woven yarns and stitch constructions — extra-fine merino wools and cashmere knitted in ribs, jacquards, ottomans and complementing stitches — before passing onto Italy, where the pieces were produced by the House. A palette of blues, reminiscent of water and sky, runs throughout, as do hues of skin and sand, black and white. Overall, the importance of a refined and luxurious feel with effortless versatility permeates the selection of pieces.

In addition, Jean-Pierre’s Haitian roots served as inherent inspiration throughout the partnership. To showcase the fashions, she enlisted award-winning writer and director, Ibra Ake, to create a short story, featuring models Alton Mason and Riley Montana with choreography by Fatima Robinson, with original music by Wyclef Jean.

“The concept of a Kompa lesson felt perfect due to my Haitian culture. The dance is suave, sensual, effortless and punk — and a gem not many people outside of Haitian culture know much about,” Jean-Pierre told WWD. “Ibra and I had several conversations over the course of which the idea formed around a training montage and video portraits of a dance performer and her instructor. Because the clothing is designed for ease and movement, ideas of performance excited us. When it came to casting, Ibra wanted more than just to bring on attractive people, so movement became the emotional center of who we would cast.”

A philanthropic component was of equal importance as design for Jean-Pierre for Azede Powered by Gucci. In honor of the launch, and part of Gucci’s “commitment to fuel community engagement, positive social change, and to reinforce our culture of purpose,” a donation will be made to CORE, a non-profit crisis response organization that is bringing aid and recovery to Haiti and to other underserved communities across the globe.

“While on sabbatical during a philanthropic trip with the Clintons I met Ann Lee, CEO of CORE. She introduced me to Sean Penn at a private dinner in New York and the rest is history,” Jean-Pierre told WWD. “I have been trying to support their mission as best I can through the years because I have witnessed firsthand the wonderful work they are doing in Haiti over the past 11 years. The news of the recent devastating earthquake and the tropical storm has been difficult, but it highlighted the importance of supporting their essential work, and further strengthened my resolve to do so. I am very grateful to Gucci for stepping up the support and amplifying the message of unity, community engagement, and positive social change.”

The knitwear-focused selection of pieces, starting at $1,900, will debut Wednesday and be available for a limited time at Gucci Wooster and Dover Street Market Los Angeles; a celebratory event will coincide at Gucci Wooster during New York Fashion Week.