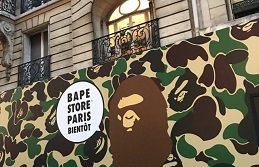 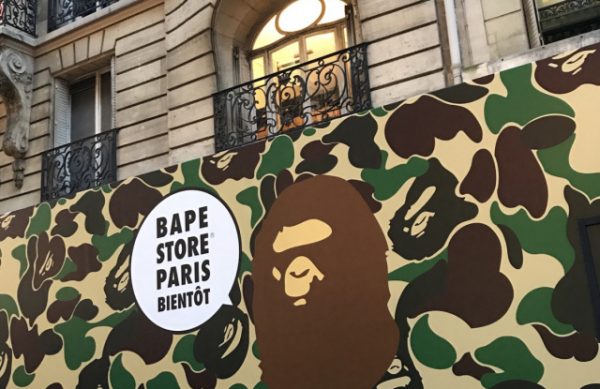 Above image: A Bathing Ape store on the Rue de la Verrerie in Paris.

LONDON — Private equity firm CVC just announced that it has invested in iconic Japanese streetwear brand A Bathing Ape after it became an independent company from fashion retailer I.T Limited, which was recently delisted from Hong Kong Stock Exchange for $168 million as it struggled with getting its online operations up to speed.

At the tine of this post, the financial terms of the deal were not disclosed, but CVC said it has gained co-control of the brand, also known as BAPE.

The firm said it plans to expand BAPE’s presence in overseas markets such as China, the U.S. and Europe, as well as “evolving its online offering to enhance the customer experience and optimizing its marketing and sales channels through increased digitalization.”

Yann Jiang, director at CVC, called BAPE “an iconic brand with a loyal fan base that has defined the fashion industry with its premium streetwear designs.”

“CVC is very pleased to partner with chairman Sham [Kar Wai] and the BAPE team, which has developed and expanded BAPE’s position as a leading global streetwear brand. We will work closely together and drive the continued success of the business,” Jiang added.

I.T boss Sham Kar Wai added that “CVC is the right partner to support the transformation of BAPE as we focus on our long-term growth.”

Nigo sold the brand to I.T in 2011 for about $2.8 million and left the brand in 2013. He later worked on multiple creative and fashion projects, including partnering up with Pharrell Williams to launch the streetwear brand Billionaire Boys Club, joining Uniqlo as creative director for its UT brand and introducing his new brand Human Made.

Most recently, he collaborated with Louis Vuitton’s men’s wear artistic director Virgil Abloh to create a capsule collection that quickly sold out. The second drop, which features a duck-shaped bag and monogram ponchos, is expected to hit stores soon.

← Previous Story Delvaux Is Up For Sale, Brand’s Owner Asking For $500-$600 Million
Next Story → Ssense Sells Minority Stake To Sequoia Capital, The Company Is Now Valued At Over 5 Billion Canadian Dollars