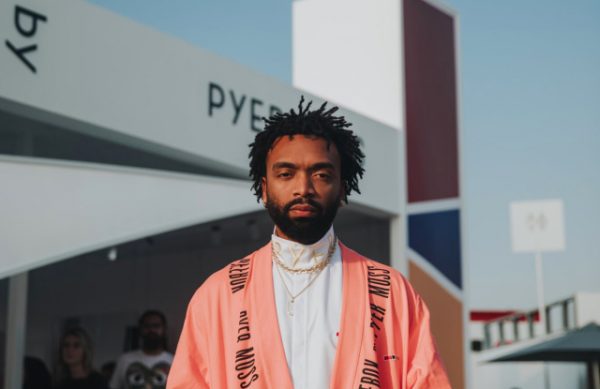 FRANCE — Kerby Jean-Raymond will be expanding his forever growing resume, and this time internationally.

This July, the Pyer Moss designer will present his first haute couture collection in Paris as an invited guest designer of the Chambre Syndicale de la Haute Couture.

This is historical because Jean-Raymond is the first Black American designer invited by French fashion’s governing body to join the couture collections.

(Another Black American fashion trailblazer in Paris was Patrick Kelly, of course, who was the first American member of the Chambre Syndicale du Prêt-à-Porter, the governing body of ready-to-wear.)

Speaking of which, D.M. Fashion Book recently reported that Jean-Raymond will return to New York Fashion Week in September to present his first rtw after a two-year break (see it here).

Jean-Raymond is one of American fashion’s most vital voices, his work has tackled issues of police brutality and the erasure of Black contributions to pop culture, and redefined the American dream.

Further details on the Pyer Moss show will be released in the coming weeks.

Pyer Moss was founded in 2013 by Jean-Raymond, who has used the medium of fashion to stir debate and promote social activism. Breaking with the seasonal schedule, the collection is produced and sold in limited editions. In 2018, Pyer Moss launched its first collection with Reebok and in 2020, Jean-Raymond became Global Creative Director for the brand (see it here).

Also in 2020, Jean-Raymond and French luxury group Kering partnered on Your Friends in New York, a venture to empower and fund a new generation of creatives in all fields.

Vice President Kamala Harris wore a camel coat designed by Jean-Raymond at a coronavirus memorial service during inauguration weekend, which was a showcase for American designers.

His clothing has also been worn by a number of celebrities, including Tracee Ellis Ross, Issa Rae and Michelle Obama.