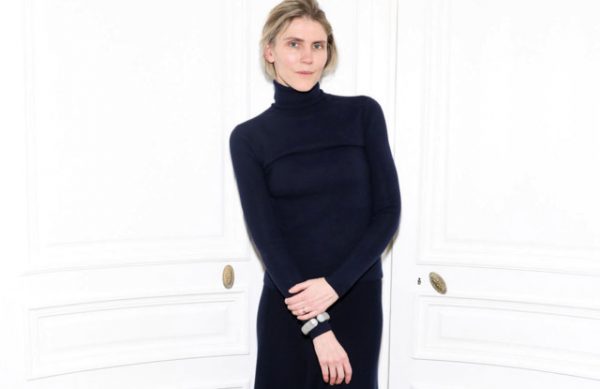 PARIS, FRANCE — Last week, D.M. Fashion Book reported that Natacha Ramsay-Levi, creative director of Chloé, who brought an edgy élan to the brand over a nearly four-year stint, is stepping down from her role at the Parisian luxury leather goods and apparel brand (see it here).

Hearst will remain the creative director of her namesake label and is expected to unveil her first collection for the storied French brand next March for the fall 2021 season.

He called Hearst a “forward-thinking woman” whose creative leadership “will be a positive force in further evolving and expanding our founder’s original vision of meaningful and powerful femininity. Together, we share the conviction that we all have a responsibility to actively participate in the shaping of a sustainable future.”

In a interview with WWD last November, Bellini outlined Chloé’s new business model. It is hinged on social sustainability, and a particular focus on the advancement and empowerment of women, in addition to environmental responsibility.

“We’re moving from a phase of collections to a phase of connections. Doing collections is not enough anymore. How you connect with your audience, how you nurture that connection, how you grow that connection is a continuous process of exploration today,” he said at the time. “What a brand stands for, its beliefs and values, will become as relevant as products and aesthetics.”

The arrival of Uruguayan-American designer — following the arrival of chief executive Riccardo Bellini, who joined from Martin Margiela in late 2019 — signals that Richemont is once again set on further deve loping the ultra-feminine Parisian brand, which has a unique history. Its founder, Gaby Aghion, is often credited with coining the phrase prêt-à-porter — or “ready-to-wear” — and helped usher in a new era of French fashion where ready-made clothes were seen as luxury. Other than longtime creative director Karl Lagerfeld, all of its designers have been women, including Phoebe Philo, Stella McCartney and Waight Keller.

Along with accessories acumen, Hearst will also bring her well-documented sustainability practice to Chloé.

Hearst, who is originally from Uruguay, started her namesake label in 2015 after more than a decade running the contemporary label Candela, which she co-founded in 2004 and, as of 2019, operated without her as a private-label business. She is as well known for using high-end materials that are often recycled or dead stock as she is for her sharp tailoring. She also made the savvy decision to only sell her hard-lined, geometric handbags directly to consumers. When they became a hit, her business reaped the benefits as she was not only able to better manage supply and demand but also maximize profits.

Hearst won the International Woolmark Prize for women’s wear in 2017, and was named the American Womenswear Designer of the Year at the CFDA Fashion Awards last September. A month later, she made her debut at Paris Fashion Week, cementing her rising international profile.

Hearst is self-taught. She didn’t go to business or design school, though sketching has always come naturally.

She married into one of America’s foremost publishing dynasties, Hearst — her husband is Austin Hearst, grandson of William Randolph Hearst.

“I am grateful for an opportunity at such a beloved brand as Chloé,” Hearst said in a statement. “I am thankful to Natacha Ramsay-Levi and all the other extraordinary designers that have come before her.”

← Previous Story Celebs Style: NLE Choppa And DJ Boof Wear A Dior Oblique Sleeveless Down Jacket
Next Story → A$AP Rocky And Amina Muaddi Teamed Up For A Collection Of Shoes