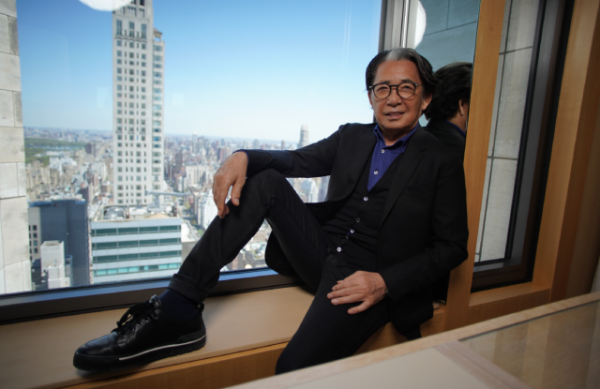 PARIS, FRANCE — Kenzo Takada, the Japanese designer best known for creating the global brand Kenzo, has died at the age of 81 due to complications related to Covid-19, according to multiple media reports.

His passing was announced by K3, the luxury homeware and lifestyle brand he had introduced last January, almost 50 years after founding fashion brand Jungle Jap, which later became known as Kenzo.

The designer left his namesake fashion brand in 1999, after it was acquired by LVMH Moët Hennessy Louis Vuitton, but he continued to support the brand under several creative configurations.

The brand staged its first fashion show in April 1970 at the designer’s boutique in the Galerie Vivienne in Paris. He launched a men’s line in 1983, which became Kenzo Homme in 1987. The more casual sportswear lines Kenzo Jeans and Kenzo Jungle were launched in 1986.

The Kenzo fragrance business, which was operated separately from the fashion company and is now owned by LVMH, as well, dates to 1967. Kenzo and Pierre Broc launched the scent Kenzo de Kenzo a year later.

The fragrance lined grew and includes the blockbuster scent Kenzo Flower. The Kenzo businesses were acquired by LVMH in 1993 for $80.5 million.

“I was a fan of the brand in the Seventies when he started. I think he was a great designer,” said Sidney Toledano, chairman and chief executive officer of LVMH Fashion Group, of which Kenzo is part. “I’m very sad. He was a great guy,” reported in WWD.

Toledano noted that Takada “supported the previous team” and he came to the first show of Kenzo’s new creative director Felipe Oliveira Baptista, though he was too ill to attend last week’s runway outing for spring 2021.

Takada was born on Feb. 27, 1939, in Himeji, Japan. He moved to Paris in 1964, after attending Tokyo’s Bunka Fashion College as one of its first male students.