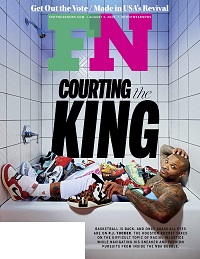 Inside, the Houston Rockets small forward talks about packing for life in the NBA bubble, inside the Walt Disney World Resort complex near Orlando, Fla., racial injustice, Black athletes having to bite their tongues to avoid confrontation, and how the pandemic forced him to buy sneakers 24/7, and more.

His stylist Kesha McLeod also spoke about him earning a spot among the most respected people in fashion today.

On packing for the NBA bubble:

“It took two or three days. I took my time with it,” said the Houston Rockets star, whose passion for fashion rivals his love of the game. “It’s so hot, so I had to find some lighter [clothing] options. I had to pick shoes for outfits and [looks] I actually wanted to wear and shoes I was going to play in. I brought shoes for every single moment in life. I didn’t plan on 100 pairs of shoes, it just happened.”

On navigating racism through his basketball career:

“I’m from Raleigh, N.C. It’s my home, the most beautiful place ever — but it has some racist history. And playing [college ball] in Texas, you play in places where you hear racist remarks all the time. Playing in Europe, I heard it all the time, and [now in the] NBA,” he said.

On Black athletes having to bite their tongues in certain situations to avoid confrontation:

“A lot of players have to compartmentalize and be the bigger person. Nobody ever sees who throws the first punch, nobody ever hears who starts it. If I would have done something in college or high school, that could have been the end of my career,” Tucker said. “I could have never ended up where I’m at. Now, it’s either you risk it all, or grit your teeth and bear it and fight through it, keeping your mouth closed.”

On how the pandemic forced him to buy sneakers because the NBA was suspended and he had nothing else to do:

“This is the first time in a long time where I had nothing to do — just hanging around the house,” he said. “I was on my computer 24/7 tracking stuff down and looking for random stuff and found some old goodies. The months of April and May, I went crazy.”

Stylist Kesha McLeod on Tucker earning a spot among the most respected people in fashion today:

In 2018, Tucker tapped the fashion expert as his creative director, and she helps him remain a mainstay in fashion-related discussions.

“There are games on ABC, ESPN, TNT — and they’ll show the guys coming in. People want to know what kind of jacket he has on, and it’s up to me to make sure everybody goes through us,” McLeod said. “After every game, P.J. makes sure to send me the photos of him walking in that tunnel walkway, and I have an email list of editors, fashion blogs, etc., where I send his fashion credits.”

Their relationship has helped Tucker become not only a focus of the fashion-focused press but also with emerging designers. “He gets a lot of exclusive looks because this is the designer’s own press moment as well,” McLeod said. “If they’re not getting it in magazines, they’re getting it in prime time.”

Head over to Footwear News to read the cover story in its entirety.