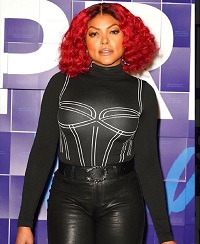 The successful actress, author and business woman has signed with 20th Century Fox TV a few months after the final season of Fox‘s Empire aired.

Empire is over but we might be getting more of Cookie. Development of a spinoff of the Danny Strong and Lee Daniels created series’ iconic matriarch is the first order of business Henson’s new deal.

The Golden Globe winning and Emmy and Academy Award nominated Henson has teamed up with Working Title alum Christine Conley to have the latter run her newly formed TPH Entertainment.

Coming out the gate, the long rumored Cookie series will be penned and EP’d by Strong, Stacy A. Littlejohn and Yolonda Lawrence. With Empire vet Sanaa Hamri set to direct, the trio will serve as co-showrunners on the spinoff if the Henson, Daniels, Hamri, Brian Grazer and Samie Falvey EP’d LA-set project goes to pilot. Strong re-upped his own deal with 20th Century Fox TV last year and has various projects on the go with the Disney-owned unit.

“I believe that normalizing stories around stigmatizing matters will make them more palatable for audiences to embrace,” Henson said of the new two-year deal and TPH.

“Art can change perception and I plan to develop projects that can help further the conversation,” the Washington D.C. – native and Howard University alumni added. “I also aim to help cultivate and establish new young talent and their stories because they are our future and deserve a voice and a platform to be heard. I’m so excited to have 20th, led by the talented Carolyn Cassidy, support me in this new endeavor!”

And with more Empire on the menu, 20th are clearly pretty excited too.

“We were lucky to have a front row seat to Taraji’s meteoric rise as a fixture on television through Empire,” declared 20th Century Fox TV president Cassidy. “Through that relationship everyone at the company grew to appreciate her passion for storytelling and her strong creative gut instinct. With Empire finished we look forward to helping her explore stories that need to be told through her talent and advocacy.”

In addition to an Empire spinoff, Henson and TPH Entertainment’s agreement with 20th will also include other projects for multiple platforms.