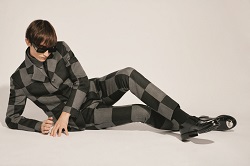 Virgil Abloh Is Taking Louis Vuitton Men’s Show On The Road, Will Show In Shanghai & Tokyo Picture: A look from the LV2 collection.  Courtesy of Louis Vuitton

PARIS, FRANCE — While some houses are trying to figure out their plans for the next few seasons, Louis Vuitton is upending its men’s wear schedule and switching to a seasonless, itinerant model of fashion shows, beginning with physical runway displays in Shanghai on Aug. 6 and in Tokyo at a later date.

Titled “Message in a Bottle,” the spring 2021 collection will introduce a multifaceted sustainability initiative, where work can be recycled, upcycled and even reissued in its original form.

Instead of showing its men’s collection in Paris, Vuitton plans to kick off its international tour with the screening of a short film that blends live action with animated characters that Abloh has dubbed “Zoooom with friends,” as they set off on a sea voyage.

“This next show is probably the biggest leap that I’ve made in terms of proposing a new system, how it lives and operates. It’s probably the most fully packaged from the clothes itself and the craftsmanship, to the things you’ll see with the films and how it activates,” the designer said.

When Alboh was advised by his doctor to slow down and take a break, it’s given him time to reconsider how he works. “I’m on a lot of different panels that were sort of questioning what fashion can become in an urgent sense,” Abloh said.

“Instead of the doom and gloom, sort of panic approach, I looked at it like, ‘Oh, this is the new frontier that we’ve been asking for in fashion,’” he continued. “We’re in a new era. I feel like this is the pandemic of 2020 with the hard stop between fashion as it was before, and I’m interested in this sort of investigation.”

Burke doesn’t think the fashion show is dead, but he’s decided to take this particular one on the road. “We know people are not going to be able to travel, so let’s not have people travel to the venues — let’s have the clothes travel to the venues,” he said.

The upcoming shows will be open to the general public and will be livestreamed, and further destinations may be added between now and the end of the year.

“We think that excitement has to come from that element of being live in front of a live audience, but it’s more modern to not have a hierarchy as to who gets to see it,” Burke said. “The fundamental idea is that we’re getting rid of the straitjacket the industry has been operating under.”

Both men stressed the playful element of the approach, which ties in with Abloh’s ongoing exploration of boyhood. “You have to bring back fun because the last time we were together, it was sad and deadly,” Burke said.

“My shows will now travel the world, the beginning and ends of season won’t be on the invite,” Abloh said. “It’s one continuous flow that has a little bit of new and some things you’ve seen before. And philosophically, when it comes to the sustainability idea, I’m starting to collapse all the seasons into one.”

The next collection is comprised of 30 looks made from new material, 25 looks made from recycled materials, and 25 looks from the previous collection. Vuitton is duplicating some existing designs in new fabrics, and Abloh asked his team to create individual looks using overstock.

Reconditioned pieces will carry the Upcycling Signal Logo, a new emblem for the house.

Abloh noted his debut show in June 2018 already reflected his globalized outlook. The show notes included a map of the world dotted with the cities where his models were born. “All the regions of the globe trigger different ideas when you place the epicenter there, and that to me is going deeper in the brain on inclusivity,” he said.

“It’s 2020. Let’s explore, debuting an idea in this hemisphere and next season we might say, ‘Hey, let’s go the complete opposite.’ Because we’re outside of this idea that Paris has to emanate, and then everyone has to come to Paris and then go back around the world.”

In terms of the pair’s ambition for the men’s division, the sky is the proverbial limit. Burke says as Vuitton’s overall revenues continue to grow, more men’s stores will likely spin off into stand-alone boutiques.

“If you take out handbags and high jewelry, basically the men’s business needs to be as important as the women’s business — and that’s the case,” he said.

“I take that baton, and I often reference the accessory, the trunk, the craftsmanship, as a reason to why we make clothes in a modern sense,” Abloh chimed in. “It’s safe to say the ready-to-wear portion of the creative endeavor is super important today and growing in importance as we move along.”

The designer is no stranger to working online. But he admitted the pandemic, with its endless rounds of Zoom calls, has left a mark.

“The collection is now designed with the idea of it being broadcast on hundreds of thousands of screens, so that’s having an effect on the clothes. I look at my studio as a mix between Disney and an art-making studio,” he said.

Having famously declared streetwear dead, he’s also having to reconsider what men will want to wear after the lockdown. His fall collection, which was all about the suit, may require some recalibrating now that many people are working from home.

“With COVID-19, I’m not gonna lie, as I’m sitting in hoodies and T-shirts every day and we’re sitting in our house, how can you switch your brain on to fashion?” he confessed.

Still, he maintains that the era of the facile hoodie has come to a close. “I want to urge the industry not to just focus on easy-to-sell garments that we know work commercially. The Nigo collection is a perfect example,” he said, noting that the Japanese streetwear pioneer was also keen to evolve his aesthetic.

“We made a collection of tailoring that was useful. It wasn’t your dad’s suit, but it had traits more toward that. And I’m excited at this point in my career to sort of challenge conceptions and hopefully make new waves,” Abloh added.

Head over to WWD to read the full interview.