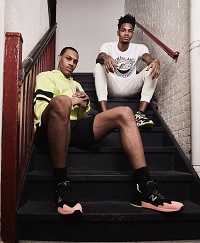 UNITED STATES — NBA players Darius Bazley of the Oklahoma City Thunder and DeJounte Murray of the San Antonio Spurs were photographed for New Balance Basketball (both players are signed to the sneaker company). The basketball players both styled in pieces from their upcoming drop, which arrives July 9th.

20-year-old Bazley changed the face of the NBA and wrote his own story. He initially committed to and signed with Syracuse but later chose to bypass college with intentions of joining the NBA G League, a decision that drew national attention. However, he instead chose to train on his own for the entire season for the 2019 NBA draft. In the 2019 NBA draft, he was selected 23rd overall by the Utah Jazz and was later traded to the Memphis Grizzlies and then to the Oklahoma City Thunder.

When D.M. Fashion Book first announced that Murray inked an endorsement deal with New Balance (see it here), he explained on social media that he chose New Balance to be “different.” ← Previous Story EXCLUSIVE: Here Is How You Could Get The Air Jordan 1 OG Dior
Next Story → Sneaker News: The Off-White™ x Air Jordan 4 “Sail” Arrives This Weekend