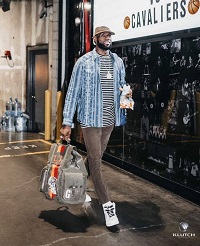 Never Too Far Down | You Can’t Stop Us: Nike’s New Campaign Mainly Focus On Overcoming Adversity

This campaign dropped in the time when we need motivation.

Called “Never Too Far Down,” the campaign centers around a short film narrated by LeBron James and features the NBA superstar along with Serena Williams and Tiger Woods and the adversity they’ve encountered — and overcome — during their careers. For James, it recalls when his team, the Cleveland Cavaliers, was facing elimination after a 3-to-1 deficit in the 2016 NBA Finals (they eventually took the title from the Golden State Warriors). For Woods, it shows when he fell to his knees after taking a shot at the Barclays tournament in 2013 because of chronic back pain that nearly ended his career. And for Williams, the video shows her determination when falling far behind an opponent in a match. The campaign, which also shows snippets of Nike athletes Cristiano Ronaldo and Naomi Osaka, among others, launched on the Saturday of Memorial Day weekend and was tied to Woods’ return to the golf course in a charity match on Sunday, where he and Peyton Manning were set to square off against Phil Mickelson and Tom Brady. The match is worth $10 million that will be donated to coronavirus relief efforts.

“The whole world, we’re fighting for something bigger than a championship right now,” James said. “People are struggling and this continues to be an incredibly difficult time. For me, thinking forward to a time when we’ll be able to play again, it keeps me going. Even if basketball looks different for a while, I’m excited about the possibility of getting back in the game because I know how inspiring and powerful sports can be. I think the lessons we learn from sports can inspire us all.”

Williams agrees: “This time has been like nothing else,” she said. “I mean, I’m no longer playing tennis! No one is. I’ve been playing tennis for over 20 years and never has a tournament been canceled in my career for any reason until now. It’s such a unique time in history right now, with all these global challenges around the COVID-19 virus and how it’s impacting all of us in ways that are the same and also so different. Some athletes are returning to sport, for others — like me — I’m really just getting back into the swing of training.”

Woods also weighed in: “This pandemic has caused so much tragedy, but sport can still be a positive force for so many people. I’m hopeful that we can all return to our sports when the time is right, and I am looking forward to this weekend and creating a platform to raise money for COVID-19 relief and hopefully remind folks of the levity and joy that golf and other sports can bring to the world.”

Since organized sports were brought to a standstill during the pandemic, Nike has worked to bring together its community through its Play Inside and Play for the World initiative. It has offered free weekly livestreamed YouTube workouts and unlocked its Nike Training Club app content. It has also been producing personal protective equipment for first responders.