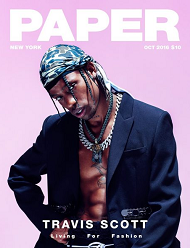 NEW YORK, UNITED STATES — Is it the end of an era for Paper Magazine‘s print edition? Just like a lot of other publications, retailers and fashion houses, Paper is affected by the coronavirus pandemic.

ENTtech Media, which acquired Paper in 2017 (see it here), has halted print issues of the quarterly magazine, with the spring edition featuring Lady Gaga the last to be printed, according WWD.

Owner and former longtime Vogue publisher Tom Florio confirmed that it had been paused and told WWD he wasn’t sure if or when print, which makes up just a small part of the business, would return.

He stressed, though, that he hasn’t made a decision one way or another yet, although most of the mainly digital company’s revenues now come from content creation, social architecture and events.

But with COVID-19 impacting ENTtech’s events business Paper Works (the cancellation of the South by Southwest festival alone meant it missed out on a seven-figure sum), Florio has also had to implement cost-saving measures elsewhere in the business, including company-wide pay cuts ranging from 20 to 30 percent for the highest paid employees and a 60 percent reduction for him.

In addition, it laid off two people at Paper and two on the business side at ENTtech, while a few employees are on reduced hours. Before COVID-19 spread throughout the U.S., it had been growing the company’s headcount.

“It’s so terrible. I’ve never been in a situation where you couldn’t ask more from people, but because of crazy life circumstances you have to make these decisions,” said Florio of the cuts. He added that the company does have enough cash flow, though, to sit this out with relatively low income.

Florio purchased Paper from Kim Hastreiter and David Hershkovits, who cofounded it in 1984 and grew it into an influential arbiter of pop culture and fashion.

The company has remained pretty quiet about the performance of Paper since the acquisition, but according to a recent release, page views grew 400 percent in the past year, while uniques are up 30 percent.