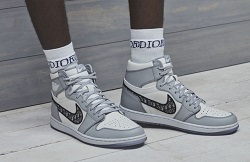 As for the AJ1 Low, we was able to get some information.

A few days ago, a leaked image posted on Sneaker News, revealed how the release may roll out. The photo stated that the drawing to purchase the High was to run from March 23 to 24, with results being sent out to the winners via email on March 26. It then listed out a staggered release across nine different locations around the world, likely referencing when those draw winners will receive or can pick up their pairs.

The last bit of information says that the drawing for the Low was going to begin sometime during the end of May and beginning of June, but not when they’ll be sent out or available for pickup/purchase.

We could now confirm that the Dior and Air Jordan 1 collaboration has officially been pushed back to later this year, according to Hypebeast.

Dior has reached out to the site to officially announce the postponement of its international draw for the launch of the Air Dior capsule:

To ensure the safety of all, in accordance with recommendations by public authorities, and in order to reinforce the coordination of international measures, Dior has decided to postpone its international draw for the launch of the Air Dior capsule collection realized in collaboration with Jordan Brand.

This draw includes a chance to win entry to a global network of exclusive Dior pop-up and pop-in locations, whose openings have also been postponed in the context of current guidelines, to protect our customers and collaborators.

A new date for the Air Dior launch and for the pop-ups dedicated to this unique collaboration will be announced in function of how this situation evolves.