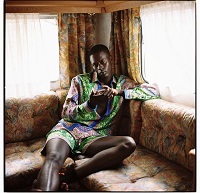 LISBON, PORTUGAL — Alpha Dia is featured in the latest issue of GQ Portugal.

The Senegal model was photographer by Branislav Simoncik and styled by Nelly Goncalves.

Dia was discovered in Hamburg, Germany after a photographer named Christian Bendel asked him for permission to take pictures of him.

His enviable cheekbones is what makes him stand out from other models. His face and physique is why casting agents and creative directors want him in their campaigns.