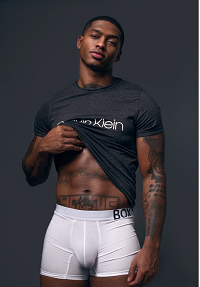 UNITED STATES — Please allow us to introduce you to fashion model Maurice Lyndell.

The Detroit, Michigan – native got his start in modeling after moving to California. He originally moved to Los Angeles  to pursue his passion for a football career.

Lyndell was attending a community college for football, but his passion was dying and he also injured his shoulder during a scrimmage game, so he decided to switched things up and pursue modeling and acting.

I want to see Lyndell take the modeling industry by storm. I envision him in ad campaigns for Nike, Calvin Klein, Under Armour, H&M, and other major brands.