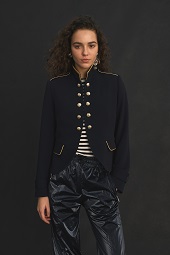 UNITED STATES — In May 2019, DM Fashion Book reported that Derek Lam “is out in the market looking for a new investor” (see it here).

Public Clothing Company has acquired the brand and installed the designer as chief creative officer of its new Derek Lam business.

Lam sees opportunities to grow Derek Lam 10 Crosby at Public, which pivoted from its roots as a private-label business to become a multifaceted platform that supports a range of fashion and accessories brands such as ATM Anthony Thomas Melillo and NOS — No Off Season active wear.

“We want to grow it in a sustainable manner,” said Dan Shamdasani, founder and chief executive officer of Public. “Derek has been in fashion for a while and understands his customer very well. The brand will be on a growth path and we are going to be investing in the brand.”

Lam told WWD in an exclusive interview: “Dan and his team have a tremendous opportunity to grow the branded business, both geographically and with new product categories. There’s a huge opportunity in international that has essentially been untapped“.

“The nice thing about our business is, when you see what’s happening in Wuhan [China, where the disruptive and dangerous coronavirus was first identified], the way we set up 10 Crosby, with pillars based in the U.S., is a solid foundation and everything else is potential,” Lam added.

Founded in 2003, Derek Lam initially focused on the luxury Derek Lam Collection and then the advanced contemporary Derek Lam 10 Crosby. Lam and his partner, business partner/chief executive officer and husband, Jan Hendrik-Schlottmann, decided to close the Derek Lam Collection business in July to focus on 10 Crosby, which at the time accounted for 70 percent of the company’s overall business.

“Me, being the creative person, it makes the most sense to continue,” Lam said. “Dan will oversee and basically take care of the business side.”

“We have really great products, it’s about getting more eyes and letting more people know what Derek Lam 10 Crosby means,” the designer said. “We’re at a point of strength to grow business organically. It doesn’t require that we rethink the business or immediately field new categories. Our partnership is to mobilize the growth.”

Lam operated several stores in the U.S., including a Derek Lam boutique at 764 Madison Avenue, between 65th and 66th Streets in Manhattan, that opened in 2010, and a store for 10 Crosby on Crosby Street in SoHo.

“The stores closed,” Lam said. “There are so many opportunities with retail partners and online business. Wading into waters to retail has to be well-considered. It’s not about having a store that’s a marketing vehicle.”

The brand is also sold online at Shopbop, Intermixonline and Net-a-porter.com, Lam said, adding that 25 percent of 10 Crosby’s sales come from its own site.

Lam has eschewed runway shows for 10 Crosby, preferring digital campaigns. “I love that, the freedom that gives me, because you’re still being creative, but it’s about branding and it’s long-standing,” he said. “Also, fashion exists online and it’s a place where visuals live and start to spread virally, so it makes sense to make that the forefront of how we promote. The [online] following is so incredible“.

“I want to really concentrate on Derek Lam 10 Crosby, because it’s the most modern way to create the product that I want to create for the audience I want to reach,” he said. “It’s everything into one label, which is actually incredibly satisfying.”

← Previous Story Opening Ceremony Acquired By New Guards Group; To Close Stores
Next Story → There Is Nothing On The Table: Kering Is Not Buying Moncler