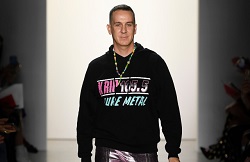 The American fashion designer, who was previously scheduled to show his fall runway collection at 8 p.m. on Feb. 7 during New York Fashion Week, is decamping to Paris. He’ll show during the next round of couture shows in July.

His team released an announcement : “Jeremy Scott will no longer be showing his fall-winter 2020 collection during New York Fashion Week. In a move to pay homage to the city that launched his design career, Jeremy Scott will show his upcoming collection in Paris in July.”

Was this move really because of the competition from Tom Ford, who is scheduled to show in Los Angeles at 7 p.m. PST at Milk Studios, on Feb. 7 as well?

Still, Ford’s move is leaving New York Fashion Week without one of its biggest stars…and now, without Scott, the latest major to drop out of a schedule that already lacked Tommy Hilfiger (showing in London); Pyer Moss (missing this season); Telfar, and, as of now, Ralph Lauren — who has yet to confirm his plans.

← Previous Story Is Raf Simons Headed To The Prada Group?
Next Story → New Creative Strategy: Pucci Is Focusing On A series Of Guest Collaborations