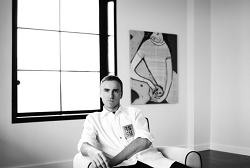 Is Raf Simons Headed To The Prada Group? MILAN, ITALY — There are rumors tat Raf Simons is headed to the Prada Group.

Market sources suggest that the Belgain designer could be headed to Miu Miu as they say that Prada’s sister label has moved its design and communication office to Milan from Paris. The sources added that Simons has been searching for an apartment in the Italian city, which may have led to the tie-up speculations.

To be sure, Simons is a longtime friend of Miuccia Prada’s and has attended several of her fashion shows. Sources also contend that perhaps Simons could be in talks to collaborate with the Italian designer in some form or work on capsule collections, given her full-on engagement at both brands.

PVH. Prior to joining the American brand, Simons served as women’s creative director at Dior. In 2015, he left the luxury house after 3 1/2 years (see it here). Christian Dior has appointed Maria Grazia Chiuri as its new artistic director, the first women to hold the position in the French house’s 70-year history (see it here).

Simons joined Dior in early 2012, replacing John Galliano after he was dismissed from the house in October of 2011. Galliano is now the creative director of Maison Margiela (see it here).

Stay tuned to DM Fashion Book as this story develops.