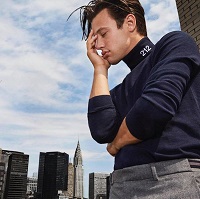 UNITED STATES — This Wednesday (Jan 1), The Society Management will launch its new men’s division, which will be led by Taylor Hendrich, who serves as executive vice president and director of Men’s at The Society.

The new board, which had been in the works for about a year, features young talents such as actor and YouTube star Cameron Dallas; singer AJ Mitchell; model Francisco Lachowski; Jorge Lopez from the Netflix original show Elite; model, actor and singer Ronald Epps, and unconventional talents Ken Roczen, a German-born pro motocross and supercross racer and Ahmad Kontar, a model and ballet dancer from Syria.

The company believes that the roster is a testament to how modeling has changed over the years. It said modeling today is not just about being a pretty face or handsome but a talented personality and someone others will want to emulate. The company said the new men’s division will be focused on fashion editorial, and that runway is not in the current plans.

“The newly formed Society men’s division teams up with seasoned managers who have expertise and dynamic personalities,” said Hendrich. “This modern team together will create a newly formed vision of seeing beyond traditional modeling and capturing the essence of the ever-changing environment, while securing a roster of special hand-picked talent with expertise in many fields. The Society men’s will be servicing the industry with a fresh perspective and modern approach for 2020 and onwards.”