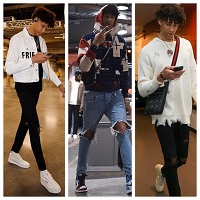 The former University of Texas college athlete and Big 12 Freshman of the Year made his NBA debut for the New Orleans Pelicans on October 10th, 2019, scoring 19 points on 8-of-11 shooting against the Golden State Warriors in an 11 point loss.

At the young age of 19, Hayes stats are pretty good. On December 5th, 2019, he scored 17 points and 5 blocks in a 139-132 loss to the Phoenix Suns, becoming the third youngest player in NBA history to record at least such statistics in a single game, behind only LeBron James and Andrew Bynum.

We put together the New Orleans Pelicans‘ Center best looks so far this season. Today, the NBA is more like a fashion show and players are arriving to arenas looking like models on the runways in Paris, Milan, London and New York. NBA players are the new style icons. They’re influencing fashion, sitting front row at fashion shows, featured in the best fashion publications and online, and they are definitely moving the culture forward.

On top of that, just about every fashion house and sneaker company wants to collaborate with basketball players.

As far as Hayes, I think he should brand himself off the court. His height, good skin, hair, size and unique style will take him far in the fashion / modeling industry. He should consider signing with Wilhelmina.