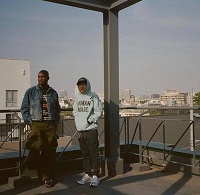 PARIS, FRANCE — Louis Vuitton men’s artistic director Virgil Abloh has teamed up with his friend Nigo, the Japanese streetwear pioneer and founder of A Bathing Ape, on a capsule collection, named LV² — or Louis Vuitton Squared to be released mid-2020.

“Me being at Louis Vuitton is directly attributable to work Nigo’s done in the past,” Abloh said to Vogue. “A collab project with him—it puts his work in the right context. He inspired me to do what I do. I thought it was a full-circle moment.” Nigo called it “a victory for our team, the streetwear crowd,” when Abloh was hired at the LVMH – owed brand.

Details on what to expect from the collection are scarce, although Louis Vuitton has confirmed that it will cover ready-to-wear pieces, leather goods, shoes and accessories. These pieces will also include a selection of dedicated graphics alongside original takes on signature Louis Vuitton designs.

Stay tuned to DM Fashion Book for an official look at the collection in early 2020, with the full release expected to follow in September next year.