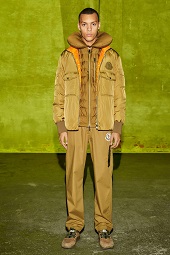 MILAN, ITALY — It is being reported that French international luxury group Kering SA has held exploratory talks with Moncler SpA about a potential deal for the Italian luxury label, people with knowledge of the matter said.

According to BoF, Senior executives at “Kering and Moncler have held preliminary discussions about a combination, according to the people. There’s no certainty the talks will lead to a transaction, the people said, asking not to be identified because the information is private“.

Shares of Moncler have risen 33 percent this year, giving it a market value of about 10 billion euros ($11 billion). Any takeover would require Kering founder Francois Pinault to win over Moncler chief Remo Ruffini, who is the company’s biggest shareholder.

An investment vehicle controlled by Ruffini owns 22.5% of Moncler, according to data compiled by Bloomberg. “A representative for Kering declined to comment, while a representative for Moncler wasn’t immediately available to comment outside regular business hours,” said BoF.

Adding Moncler would help Kering keep pace with larger rival LVMH, which recently agreed to buy jeweler Tiffany & Co. for $16.2 billion in the biggest-ever luxury deal (see it here). The rivalry between LVMH Chairman Bernard Arnault and Kering’s Pinault has fueled the transformation of the industry over the past few decades, as the French companies raced to assemble a broad array of labels under the same roof.

It has become increasingly dependent on Gucci, which provided more than three-quarters of the company’s operating profit in the first half of the year.

Kering is now run by Pinault’s son Francois-Henri. Moncler‘s $2,000 puffy down jackets have moved beyond the ski slopes of St. Moritz to the inner cities in America as well as the Aspen snowmass ski resort.

The driving force behind Moncler is Ruffini, who bought the company in 2003 and transformed it from a failing French maker of functional but no-frills outdoor gear into one of the world’s hottest luxury brands. It has 49 stores in greater China, where consumers are driving the industry’s growth.

Shares of Moncler have roughly quadrupled since the company completed its initial public offering in late 2013.

The company said in October that sales for the first nine months of the year rose 12% at constant exchange rates, reassuring investors that Chinese consumers are still spending on fancy ski jackets despite the effects of anti-Beijing protests in Hong Kong that have hit sales in the key luxury hub.

Longer term, Moncler has faced questions about where growth will come from if its fans tire of buying expensive coats. The company has added everything from swimsuits to sneakers, and Ruffini has launched collaborations with outside designers in a bid to broaden its appeal.