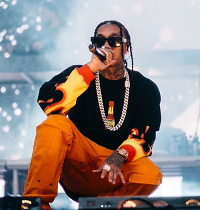 UNITED STATES — Rapper Tyga is headed back to the bank! The Compton – native has signed with Columbia Records in a multi-million dollar deal. He recently released chart-topping hits such as “Taste” featuring Offset, “Dip” featuring Nicki Minaj and YG’s “Go Loko”. His seventh studio album, Legendary was released last June via EMPIRE.

Joining the Sony Music label was a decision made with a global view, Tyga tells Variety. “They definitely understand the global brand,” he says of the company. “I have a lot of fans worldwide — in places I’ve never been like South America, and in places  I have been like Asia and Europe. They can help bring that to a larger scale. Doing it independently, you don’t really have those teams to help worldwide. Sony, if you look at the history from what they’ve done from Pharrell to Beyonce to Adele — then you look at Lil Nas X, one of their new artists that’s blown up this year — they’ve done a lot for artists globally, for their brand. That’s why I wanted to partner up with them.”

It’s not Tyga’s first time at a major — in 2008, he joined the roster of Cash Money, which is distributed by Republic Records — and an earlier signing with Sony/ATV Music Publishing, brokered by senior executive Shawn Holiday, brought him into the Sony fold. Once Tyga came to know Columbia Records chairman and CEO Ron Perry, the deal was as good as done.

“I’ve always wanted to work with Ron Perry,” says Tyga, who first became aware of the executive as president of Songs Music Publishing, home to Mustard’s 2011 track “Rack City,” one of Tyga’s biggest career hits to date. “I’ve been a fan of how he’s been able to spot talent; how he’s been able to A&R; and to publish people. And likewise, he’s been following my career for a long time. It makes sense for me to do something with Ron. If I was going to go anywhere major, I want to go somewhere where the head person in charge is really about the music and really understands me.”

But that doesn’t discredit the hustle and grind he put in on his own, nor does he harbor any bad blood with EMPIRE, the label founded by Ghazi. Says Tyga: “I’m so fast [with] the way I like to move, and they’re just as fast as me. We’ve been able to do a lot in a year.”

In fact, Tyga believes his journey as an independent artist prepared him for the slow-and-steady career growth he’s experienced. “The independent thing taught me a lot,” he says. “It was a do-it-yourself motto — learning how to get from point A to point B. Now doing a deal through Columbia, it’s like I already know the ropes.”

With “Taste” closing in on one billion views on YouTube, Tyga is staring down another hit. This time of the viral variety, he hopped on Columbia signee Ambjaay’s “Uno” — a remix which recently received a colorful lyric video treatment. As for his next release, Tyga teases: “I can’t tell you, it might be a surprise. I’m always in the studio. I could put a single out and have another out right after. I’m always creating. Sometimes I want to make an album or a song out, or a joint album with somebody. I’m very indecisive when it comes to releasing music on my own because I got so much of it.”