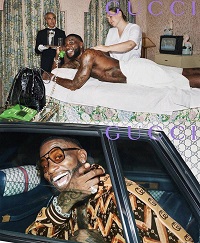 ITALY — Fashion month Spring 2020, is just about over and luxury houses are releasing their Resort 2020 campaigns. Earlier this week, Gucci debuted its new imagery for the season.

If you’re an Instagram user, than most likely you saw photos posted on the social site, thanks to rapper Gucci Mane. The Italian house teamed up with the Atlanta-based rapper for the cover art of his forthcoming LP, Woptober II (dropping October 17), which is also part of Gucci‘s ad campaign.

Artistic director Alessandro Michele, who created an eclectic, ’70s-inspired collection with political messaging woven in for Resort 2020, teamed up with art director Christopher Simmonds and photographer/director Harmony Korine to throw a Gucci-fied house party at Villa La Furibonda in Rome.

Titled “#ComeAsYouAre_RSVP” (yes, hashtag included), the campaign also features Sienna Miller and Iggy Pop alongside Gucci Mane, as well as an eclectic crew of party people dressed in what might be the last pieces of Michele’s signature “Guccification.“

“Gucci’s party is permanent because it represents, first of all, a state of mind: Everything is possible, there are no boundaries, everybody goes with everybody and what goes around comes around,” reads the campaign’s press release. “The clothes offer endless possibilities to be whomever you want or to appear as you prefer, without any barriers or limits whatsoever.”