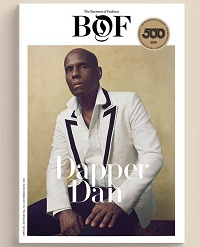 The online magazine just unveiled its latest cover featuring the Harlem atelier turned Gucci designer. The shoot was photographed by photographer Kevin Trageser. Below are some excerpts:

“In the late 1970s and early 1980s, when he began designing clothes for his store on 125th Street in New York City’s Harlem, Daniel Day — known to the world as Dapper Dan — developed a practical interest in Gucci, then a family-run accessories business. At the time, European leather goods brands were becoming international status symbols: aspirational consumption was growing fast. But back then, Gucci and Louis Vuitton didn’t sell clothes. What they did sell, however, was logo-printed garment bags, which Day cut up and fashioned into sleeves or panels for designs he sold to a local clientele that included hip-hop stars like Eric B & Rakim and LL Cool J, as well as local gangsters“.

“At first, Day used Louis Vuitton. But because the French luggage brand’s bags were made of far less-pliable vinyl, he began to favour Gucci’s canvas version, which was sturdy but thinner, and therefore easier to manipulate. In the coming years, Day became known for his bootleg Gucci pieces, and the Italian brand’s New York shop girls would often refer clients uptown when they came in asking for one of his pieces. But by 1992, the Gucci family was about to lose control of the company, Tom Ford was designing ready-to-wear and Day was forced to close his store and go underground as luxury labels including Fendi, MCM and Louis Vuitton cracked down on his use of their logos with legal action“.

“I took real notice in 2000, when I saw a Tom Ford coat on a magazine cover that looked exactly like one of the coats I had made,” Day said during a recent interview, dressed in head-to-toe Gucci, down to his custom wingtips, at a Harlem atelier funded by the brand in a generous — yet undeniably self-serving — attempt to right the fallout after it was accused of stealing Day’s ideas.

“I was voiceless then,” he said, thinking back to the turn of the millennium. Day was painted as a criminal, rarely credited by the brands who were swiping his designs. Even fashion journalists, from American Vogue to Essence, failed to recognise his influence. (The first and one of the only magazines to profile him prior to his Gucci-backed second coming was London-based The Face in 1989, just a couple of years before he closed his store.)

By the time Creative Director Alessandro Michele sent out a blatant copy of Day’s 1989 Vuitton-balloon-sleeved fur jacket (remade with Gucci logos, of course) on his Resort 2018 runway, things had changed. Despite the rise of streetwear and sampling, fashion brands flagrantly filching from marginalised cultures and classes was no longer considered acceptable by key organs of society, from media to universities, which had become increasingly attuned to the intersection of identity and power.

Below Dan speaks on inclusivity.

See more excerpts and pics on the next page!