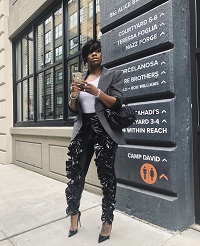 NEW YORK, UNITED STATES — New York Fashion Week has comes to an end, but we have some photos of R&B/ Soul singer Fantasia Barrino making her rounds in the Big Apple.

Hasn’t the music superstar been killin’ these looks? During NYFW, Tasia made her rounds and attended various shows. Personally, I love all of her ensembles.

Fantasia, who first burst onto the scenes over 15 years ago, when the world was introduced to her on American Idol, is prepping her new album, Sketchbook. The project is slated for release this fall. In an interview with Billboard, the singer explained how she came up with the title: “there was a studio that she worked from that boasted a variety of paintings on the wall that inspired her. It turned out that the artist was a relative of someone at the facility. The singer then commissioned her to sketch a portrait. Then it all clicked“.

“I’m like, ‘Sketchbook! Thank you God. That’s what I’m calling the album because that’s what my life has been,” she explains. “Sketches are not perfect. You see the flaws and certain things but I’m still growing and whatever God has in mind, I’m still becoming that woman. I want people to see my journey, the fact that I’m being sketched in and I want them to hear it through the music this time.”

Be sure to purchase the new album when it drops and go online to see when her tour is coming to a city near you.