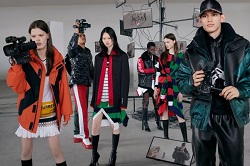 The advertisement was shot by photographers Danko Steiner and Nick Knight “to explore and represent the breadth of who Burberry appeals to.”

The campaign “showcases the refined and the classic alongside the more relaxed and free, expressing two distinct viewpoints of one collection.”

Despite the international line-up, the campaign, like the collection “celebrates the contrasts and contradictions in British culture and weather, from the structured to the rebellious, evolving the cues and codes first set out in Riccardo’s debut collection for Burberry last year.”

Tisci said of it all: “At the core of what we are doing at Burberry is a passion for the house to become an identity and a lifestyle — one that transcends barriers and is inclusive to all. This campaign explores the many facets of British culture and how they coexist. Together, Danko and Nick celebrate the importance of self-expression and identity through their own distinct lenses.”