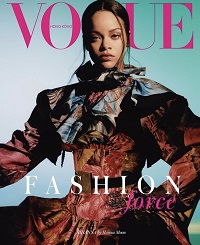 HONG KONG — The September 2019 issues are now arriving on the Internet and newsstands around the globe. Magazines are bringing their A-game with eye-catching covers. Some issues even weigh more than a pound and has over hundreds of pages.

Next up is Rihanna! The international pop star, beauty mogul and fashion designer covers the September 2019 issue of Vogue Hong Kong.

This issue was photographed by Hanna Moon and styled by Anya Ziourova.