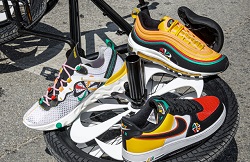 Something Different: Foot Locker To Sell Variations On Nike’s Swoosh BEAVERTON, OREGON — We’re all familiar with Nike‘s logo, we see it just about everyday. The Swoosh was marketed just as well as Steve Jobs‘s Apple logo and the McDonalds logo.

The Nike logo appeared on millions of products — a symbol that’s meant to evoke the sound of speed and movement. The Swoosh has had various permutations over the years, and now, with Evolution of the Swoosh, Foot Locker is paying homage to three of the iterations with sneakers and apparel for men and kids, and a women’s collection bowing at the end of the year.

“We wanted to go back to some authentic interpretations of the logo,” said Patrick Walsh, vice president of marketing of Foot Locker North America. “I’m sure Nike has others in the vault. That’s what’s interesting. Over the years, Nike has done some different things with the Swoosh. If this is successful, I can’t see why we can’t go back. Nike is willing to try new things. It’s a testament to the quality of the logo and its usage over the years that we can create a collection years later, and it doesn’t feel dated.”

The next release on Aug. 17 will feature the Sunburst Swoosh Pinwheel, developed in 1972 by Nike’s first employee, Jeff Johnson, who was inspired by the 1972 Munich Olympic logo when he originally fanned out the swoosh to make the sunburst design. Products aligned with the Swoosh Chain, one of the earliest interpretations of the logo, will be released on Aug. 31.

Apparel, priced from $30 to $80, will include fleece hoodies and fleece bottoms, tracksuits, T-shirts and accessories. Footwear is $110 to $170. “We’ll have something for women at the end of the year. We made a conscious decision to feature women in the campaign. If they want the product, they’ll decide,” Walsh said, noting that the collection may have unisex appeal.

“What’s interesting about Foot Locker’s digital campaign is that the Nike Swoosh is iconic, but it’s always played a role in our lives, from the everyday moments to the milestones and everything in between,” Walsh said, adding that the campaign, “We Live Sneakers,” starring athletes, musicians and social media influencers, enact situations impacted by sneakers.

The interconnected vignettes include rapper Anuel AA waking up and finding a pair of Script Swooshes in his sneaker closet, then walking across the lawn where Chicklet is pleading with Maleni (the couple are Instagram celebrities), who is throwing his sneakers out the window. “I don’t care about none of this stuff — I only care about you,” Chicklet says. “All you care about is these,” says Maleni, a Swoosh Chain sneaker in her hand. “Just not those, not those, please,” Chicklet says. On the steps of a church, rapper DaBaby lifts his bride Justine Skye’s wedding gown to reveal her Swoosh Pinwheel sneakers.

“We’re bringing it to life from an authentic perspective,” Walsh said. “When people watch the campaign, they’ll connect with it and say, ‘That’s me,’ whether they connect back to the actor because of music, gender or ethnicity.”

“We’re feeling really good about what we’ll have for women customers,” Walsh said. “Women’s will be an extension of the story with apparel and footwear. It will be an exclusive collection for women as we continue invest in our women’s business. Originally, this collection was for men’s and kids, then women’s made available.”

“We’re expecting strong sell-throughs through for the weeks the products come out, but we don’t  expect them to sell out,” Walsh said. “We’ll have elevated merchandising and Nike areas with light boxes, shadow boxes and window merchandise. This is a key program for back to school season.”

Evolution of the Swoosh products will be sold at Foot Locker’s family of retail brands, including Foot Locker, Kids Foot Locker, Footaction and Champs Sports, both in stores and online, and Eastbay.com.