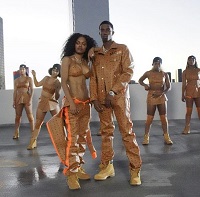 The nostalgic song samples Ma$e and Total’s ’90s hit “What You Want” while the video pays tribute to classic ’90s videos.

It opens with an homage to LL Cool J‘s “Doin It,” as Teyana stares through a peephole while watching herself in various outfits, and even bites an apple just like LL did in the 1995 clip. She then strips down to her white bra and panties while dancing on a white carpet in another throwback scene.

From there, she takes it back to the Shiny Suit era. Teyana plays Ma$e while King Combs channels his famous father from the “Mo Money Mo Problems” video, flashing his six-pack abs for the camera.

In the video, the twosome were styled by costume designer, stylist, and MCM‘s global creative partner Misa Hylton.