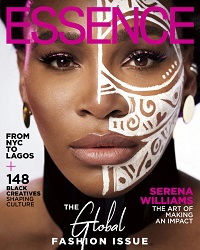 Next up is Serena Williams! The international tennis champion and fashionista covers the September 2019 issue of ESSENCE, dubbed the “Global Fashion Issue“.

“We are beyond ecstatic to have Serena Williams—one of the most photographed women on the planet—to be the muse for our September Global Fashion issue,” said ESSENCE Chief Content & Creative Officer MoAna Luu. “This issue promises to be one of ESSENCE’s biggest with a fresh new redesign. We also brought the best Black creatives in the world—including visual artist Laolu, who gave us Serena’s stunning face painting for the cover—to present all of the stunning visuals that you see.”

In the issue, the world-class tennis pro opens up about everything from bouncing back her body after motherhood to investing in herself when she launched her own clothing line.

“My biggest joy is that I know that I’m doing something that I’ve always wanted to do, that I always dreamed of doing,” Williams told ESSENCE, “I just needed to do it on my own. Because when you invest in yourself, it helps your confidence, and you’ll know forever that whether you make it or not, you stepped up to the plate.”