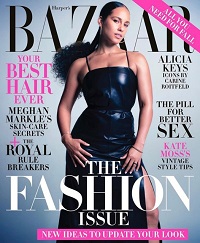 For this year’s #BAZAARICONS, Global Fashion Director Carine Roitfeld chose 10 cultural forces who have redefined any rules about their crafts.

For this issue, the multi-platinum singer styles in Ferragamo, Max Mara and Cartier.

Below are some excerpts from Keys cover story:

Born and raised in Hell’s Kitchen and Harlem, Keys keeps it real in every aspect of her life. Since the release of her breakout album, Songs in A Minor, in 2001, she has garnered 15 Grammys and sold more than 30 million records. Throughout all of this, she has stayed on the straight and narrow path of success and creative authenticity with zero press-hungry antics, tropes, or gimmicks. Thanks to a mother lode of sheer talent, Keys is one of those rare stars who never has to strive for relevancy or rely on reinvention.

Keys on her creative process:

“Every time I create something, I feel it’s the best thing I’ve ever done,” she says. “I might experience self-doubt in the process, but once I’ve finished I feel very confident. I still have that childlike wonder.”

A. Keys on motherhood:

“Motherhood gave me a stronger sense of clarity,” the “Girl on Fire” singer says. “I used to be less aware of how I wanted to spend my time and more influenced by other people. After I had my kids, I felt like I had found my North Star. I was less wasteful; I worked more effectively.”

Head over to Harper’s Bazaar for more.