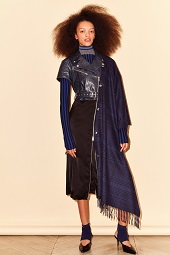 PARIS, FRANCE — According to WWD‘s sources, “A Paris commercial court has decided to liquidate Sonia Rykiel after the struggling fashion house failed to secure a new buyer, ending a four-month period of negotiations and extended deadlines and prompting immediate store closures“.

“Uncertainty has loomed over the famed striped knitwear label and its 130 employees since it entered receivership in April. Its owner, First Heritage Brands, had mandated investment bank Compagnie Financière Edmond de Rothschild in January to seek an investor or outright buyer for the brand, which it acquired in 2012,” reports WWD.

Two proposals had emerged as front-runners over the past several months — one led by former Balmain chief executive officer Emmanuel Diemoz and another involving a wealthy French family with industrial holdings in other sectors, but no experience in the fashion business. According to sources, the bid from Diemoz hinged on the lowering of rent costs for the label’s emblematic Left Bank flagship while the other bid lacked a convincing financial strategy. A Chinese player also showed interest during a later stage of the process, the sources said, suggesting that the context of diminishing Chinese investment abroad and jitters about Yellow Vest protests in France might have weighed on the process.

Sonia Rykiel owners, who have invested some 200 million euros in the brand over seven years, intend to assist employees with training or finding new jobs these people said.

Sonia Rykiel has struggled to find its footing since its founder passed away in 2016.

In 2012, the founding family sold an 80 percent stake to Fung Brands, an investment company backed by Hong Kong billionaires Victor and William Fung that is now known as First Heritage Brands.

The owners sought to revive the business by capitalizing on its identity, anchored by founder Sonia Rykiel.

This past March 2019, DM Fashion Book reported that Julie de Libran is out at Sonia Rykiel! She exited her role as creative director at the  French fashion house known for its striped knits looks (see it here).

Rykiel counts 10 freestanding boutiques, most of them in France, including its historic flagship on Boulevard Saint-Germain, after closing locations in New York, London, Brussels and Luxembourg. It has around 200 points of sale worldwide, with partners including Lane Crawford and Net-a-porter.