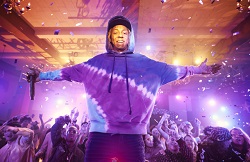 PITTSBURGH, PENNSYLVANIA — American lifestyle clothing and accessories retailer American Eagle is getting in the mood for back-to-school season by offering a collaboration collection with multiplatinum-selling rapper Lil Wayne.

The AE x Young Money collection, which launches on Aug. 10, is composed of 25 tie-dye and color-blocked pieces such as graphic T-shirts, shorts, hoodies, socks, boxers, hats and American Eagle’s Stacked jeans, ranging in price from $8 to $100. The collection includes skate decks, a nod to the rapper’s hobby.

“I know my fans wear and love the brand, so we came together to co-create a collection that blends my personality with American Eagle’s iconic style,” said Lil Wayne. “We designed the AE x Young Money collection with purpose and pride. Whether it’s my music or my style, I have always used both as an outlet for creativity and to live my truth — without apologies. American Eagle gets it. The brand celebrates individuality and to me that’s something I want to be a part of.”

The BET and Grammy Award-winning rapper favors the tie-dye print pieces from the collection and the oversize hoodies. “I’ve been living in them on tour,” he said. “My pieces keep going missing, so I have to call American Eagle for more.”

On July 15, American Eagle released a sign-up link for fans to be notified when the collection is available, and will unveil it on July 30. The retailer is also rolling out the collection to all of its stores in addition to its web site.

“A lot of times when brands collaborate with someone, it’s limited distribution, but we want to celebrate all of our customers and Wayne,” said American Eagle global brand president Chad Kessler. “We’re sending the collection to all of the stores. You don’t have to have access to a major city to find it. We’re also launching it on our web site.”

Kessler said Lil Wayne “might not be the first person to come to mind” when discussing fashion, but the company reached out to him because his song “Uproar” from his latest album, Tha Carter V, has been very popular with the retailer’s Gen Z customers. The uptempo song produced by Swizz Beatz is being used as the soundtrack for the company’s fall marketing campaign.

“We just love his style, we love him as an individual and thought it’d be exciting to work with him,” added Kessler. “He wears a lot of stuff that we’re excited about for back-to-school. We found out on the shoot that a lot of people from his band wear American Eagle.”

This partnership is also fitting given American Eagle’s relationship with music. The company sponsored concert stages at Governor’s Ball in June, is sponsoring a stage at Lollapalooza again in August and has featured musicians in its campaigns. “Music is always a major part of young people and I think Gen Z is no different there,” said Kessler. “We’ve had musicians in our campaign, but this is our first time collaborating with a musician.”

In June 2018, American Eagle launched #AExME Artists, in a partnership with Universal Music Group and Brands, to highlight emerging music talents through a digital content series. The retailer also featured the Kendrick Lamar song “DNA” from his album DAMN for its Make Moves video. “Last year, we had a featured song and this year we thought we could take it to the next level with a product collaboration,” Kessler said.

The American Eagle fall campaign, which was directed by cinematographer Mathieu Plainfossé, features real dancers, skateboarders and young creatives dancing in the brand’s new denim styles, including Curvy, AirFlex and Stacked. The campaign is a continuation of its AExME platform that featured real teens and young adults who had styled themselves in the brand and, in the spring campaign, took their own photos as well.

“We filmed [the fall campaign] as a homecoming dance showing the great diversity of the cast with Uproar and Wayne performing live,” said Kessler. “We want to show optimistic kids having fun and moving in the jeans.”

“’Uproar’ is an anthem for self-expression,” said Lil Wayne. “The single is relatable because we’ve all been there — there’s no fluff. I’m just speaking the truth — I think that’s something the fans can get behind.”

The jeans are a push for fall, especially Curvy, which took one year to produce. The new fit will be available in high-rise jeggings and mom jeans, among other styles, and will be available in sizes 00 to 24. “We realized we didn’t have jeans for everybody up to size 20 online and size 16 in stores,” Kessler said.