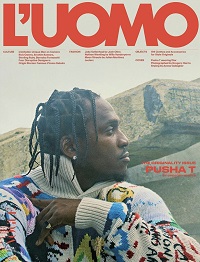 The shoot was photographed by photographer Gregory Harris. Styling was courtesy of Avena Gallagher. The V.A. rapper styles in various looks from Dior. Below are some excerpts:

You grew up during the Reagan era in Virginia, but always kept a foothold in the Bronx. How big were the differences between these two worlds?
They were polar opposites. In Virginia, everything is spread out, and my parents were very sheltering: “Don’t go too far, don’t venture off,” things of that nature. New York, on the other hand, is built to walk and explore, and my grandmother – whom I visited every summer – was more than happy to let me roam to my heart’s content. It’s there where I first learned about independence and how to navigate the streets.

The crack epidemic hit New York between 1984 and 1986. Was Virginia affected as well?
It hit Virginia extremely hard, and thanks to the I-95 [the East Coast’s main highway, which runs from Florida to Canada and as such is used as a drug pipeline] we had guys from New York and even Miami migrating here in droves to expand their businesses. As kids we were witnesses to all that.

You and your brother were active participants in that trade, until you decided to pursue a career in music. We never looked at dealing as the end-all-be-all career choice. It just so happened that we grew up during the drug era, surrounded by everything that lifestyle entails, so it was more like youthful mischief than a conscious decision. Looking back at it now, at 41 years of age, I realise that at that time we were incredibly desensitised to the effects it had on people: we just saw drug dealers with the purple Porsches. At the same time, we watched guys like Teddy Riley, Timbaland and The Neptunes come up and that helped us realise music’s own allure.

Speaking of The Neptunes, how did you, your brother No Malice and Pharrell connect?
In the early 1990s, my older brother Gene started doing music with Timbaland. In those days I wasn’t even rhyming, mind you, but once I got introduced to Pharrell through a mutual friend I was hit by the appreciation he showed for his work. Around the time Timbo moved on to work with Jodeci, I started learning how to rap, and after a while my brother and I formed Clipse, and, in 1996, Pharrell got us a deal at Elektra, for which we recorded our first album. It should’ve come out in 1999, when The Neptunes were having huge hits with Ol’Dirty Bastard and Kelis, but sadly it got shelved.

Label setbacks have marked Clipse’s history. Did your experience on the streets help you in dealing with them?
It helped me deal with disappointment, in the sense that it taught me not to dwell on things and move on. And yes, the Elektra situation was unfortunate, but since we still managed to walk away with a good advance and some benefits owed to the relationship with The Neptunes, it wasn’t all bad.

In 2009, after Til the Casket Drops, your brother No Malice felt that Clipse’s music no longer represented his lifestyle, so you parted (artistic) ways. As a solo artist, you hooked up with Kanye West, arguably hip-hop’s hottest producer. What were the biggest obstacles you had to face?
Not many. To be sure, when you’re with someone you can, for example, double-team the producer, and with Kanye being involved in so many endeavours there are more roadblocks or time constraints that I have to manage alone, but not much more.

You wore BAPE back in the mid-2000s, and you even rocked Marcelo’s County of Milan T-shirts before anybody.
County of Milan have been so helpful – I did my first merchandise with them.

Aside from your collaboration with Adidas, is there any designer you’re currently working with?
I’ve done a lot of work with Kim Jones and Dior. He dressed me for everything – from my wedding to the Grammys to the Daytona party – and while I like to keep my options open, especially since there are many brands that I like, I also want to reciprocate to those that have been the most loyal towards me.