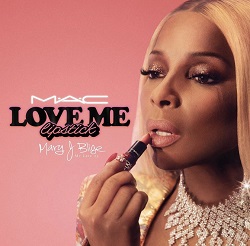 NEW YORK, UNITED STATES — Mary J. Blige is having a great year so far. She won the 2019 BET Lifetime Achievement Award and DM Fashion Book recently reported that the Queen of Hip-Hop Soul and her newly launched Blue Butterfly production company have signed a first-look TV deal with Lionsgate (see it here).

MAC is known for their epic makeup collaborations, and the brand’s latest project — a lipstick collection with none other than the R&B / Hip Hop soul singer.

The Love Me lipstick collection is set to roll out a whopping 24 lipsticks over the course of the summer, kicking off with MJB‘s ultimate pick: a light, pinky-nude called French Silk. According to MAC, it features the perfect combination of brown, peach, and pink undertones, flatters a wide range of complexions, and has a lightweight formula that’s silky, with a moisturizing satin finish.

“I love a nude lip because it’s just effortless and it doesn’t fight with everything that’s going on,” Blige said in a statement to Allure about why she chose the shade. “Even if you’re all glammed up, there’s something about a neutral lip that makes you look younger.”

Blige also served as a celebrity judge for the Love Ball in New York City, a charitable event sponsored by MAC that benefits the New York City AIDS Fund.

“MAC and I have always had a supportive relationship, and we’ve both always been vocal about the issues and beliefs that we stand by, including our similar, steadfast positions on inclusivity, diversity, and women’s empowerment,” Blige said in the same statement. “This year marks a huge milestone of 25 years for both of us: For me, the 25th anniversary of My Life,” her iconic album, which debuted in 1994, “and for MAC, the 25th anniversary of Viva Glam, so it was a great time to come together again,” she added.