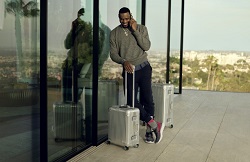 Rimowa is issuing the second iteration of its “Never Still” advertising campaign, featuring a diverse cast of globe-trotting characters. Joining the Los Angeles Lakers small forward is Dior Homme artistic director Kim Jones and Chinese master pianist Yuja Wang . All were shot traveling between four countries. Each was documented by a different director, tasked with creating content that will appear in digital ads and outdoor campaigns.

Rimowa chief executive officer Alexandre Arnault said of the campaign’s second wave: “I think for a brand to really make their messages heard, there needs to be time. Nike didn’t just come up with ‘Just Do It’ only once, they continue using it today. Every day we want people to see what we stand for and keep surprising people.”

The executive says that featuring a diverse cast, “is very important to us for sure. We try to have men, women, young, old, black, white Asian from different industries — music, fashion, sports, food, whatever. We want to be as inclusive as we can — it’s another proof of authenticity to our client, all continents, genders, everything.”

James’ campaign film — shot by Philippe Tempelman — explores his global travel in pursuit of athleticism, while also focusing on the I Promise School he built in his hometown of Akron, OH, which educates underserved youths.

Rimowa is LVMH Louis Vuitton Moët Hennessy’s first subsidiary to announce a digital-only advertising policy. Arnault says this will continue, as “It’s a way for us to reach our clients where they are. Our clients don’t spend time reading print today, they are on the road, in cities and on their laptops — that’s super important to us.”

In 2016, LVMH Louis Vuitton Moët Hennessy purchased an 80% stake of Rimowa from Dieter Morszeck, the grandson of the founder for €640 million ($716 million) (see it here).