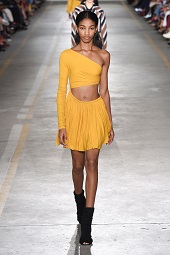 Could Damac Be The New Owner Of Roberto Cavalli? MILAN — Is the trouble for Roberto Cavalli finally coming to the end?

According to reliable sources, Dubai-based property developer Damac has emerged as the investor most likely to buy the Roberto Cavalli brand. The last word now goes to the administrator, who is expected to communicate his decision next week.

“Damac’s plan was the most complete, the one preferred by the owner [Clessidra Sgr],” said one market source. “OTB also presented a strong plan, but not as comprehensive as Damac’s.”

Damac was especially interested in Cavalli because its strategic investment arm Dico International is working on a five-star hotel tower in Dubai that is expected to comprise 220 rooms and to be completed in 2023. When the deal was revealed, Cavalli’s chief executive officer Gian Giacomo Ferraris said this was the first of at least five hotels, called Aykon, to open in 10 years. Damac, which is one of the top 10 companies publicly listed on the Dubai Financial Market with a market capitalization of $4 billion, is funding the project with an investment of $500 million. Damac is also building Just Cavalli villas in Dubai.

Cavalli received a total of five offers. Three offers were binding for 100 percent of the company. Another binding offer was made to purchase unspecified company assets, while a fifth party submitted a nonbinding expression of interest.

April 2019, DM Fashion Book reported that a spokesperson said the company’s U.S. subsidiary, operating under the ArtFashion Corp. moniker, is filing for Chapter 7 this week (see it here).

This follows the announcement that day that Roberto Cavalli SpA’s board had decided to file a restructuring plan with the Court of Milan that would allow it to continue to operate while holding discussions with creditors under the so-called process of  “composition with creditors.”

On the evening of March 29, all U.S. stores ceased operations, going out of business starting from the following day. Merchandise and store keys were taken into custody by a security company and handed over to the trustee.

On April 1, 2019, news broke that Paul Surridge has resigned, leaving his role as creative director of the Roberto Cavalli brand (see it here).

Last December 2018, we reported that Italian fashion designer and OTB Group‘s President Renzo Rosso, was interested in buying Roberto Cavalli through his OTB holding company, Il Sole 24 Ore (see it here). OTB’s Staff International is Just Cavalli’s licensee, so the  investment would also have made sense for OTB. Renzo Rosso’s OTB is parent of brands such as Diesel, Marni, Maison Margiela and just recently the Amiri brand (see it here).

According to market sources, Bluestar Alliance, which has investments in Tahari, Bebe and Catherine Malandrino, continued to look at Cavalli and presented an offer.

February 2019, we exclusively report that a Roberto Cavalli sale is approaching. And from the looks of it, Philipp Plein could be the new owner (see it here).