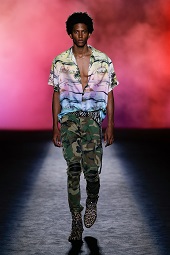 The label, which is known for its distressed denim jeans, hoodies and pricey tees was founded by Mike Amiri in 2014.

“It’s 100 percent my world and my mentality in luxury,” Rosso told WWD in an exclusive interview.

He was speaking of the founder and the rock-‘n’-roll-inspired, born-in-L.A. luxury brand, which sells men’s and women’s $1,250 hand-distressed Japanese denim, $650 shotgun-distressed knits, $1,100 palm-tree-painted trucker jackets and $1,390 bandana-buckle boots inspired by Axl Rose at stores including Barneys New York, Maxfield and Mr Porter.

“It’s what I would have dreamed to do and I found it ready and done by Mike. I am very happy to be his partner, to have a supporting and strategic role, and I want to help him grow the brand by bringing my 40 years of experience to the table,” added Rosso.

Financial details were not disclosed, but Rosso said this was a minority investment.

“It’s a great story, I have been following him for a long time and Amiri has become one of the most interesting shows in luxury. I like how he interprets luxury sportswear with a distinctive voice. We’ve been meeting for a while, we’ve been talking about a million things, and we have a great relationship — our partners get along, too. He is honest, lovely and very modern in his approach,” touted Rosso.

“Mike and I are very similar, but in addition he sketches. He is a rare creative talent and passionate entrepreneur at the same time, a lawyer son of lawyers — he knows how to negotiate and discuss contracts,” Rosso said, referring to the designer’s background making one-off jackets for rock stars while he was a Loyola Law student. “But we understand each other right away and make decisions quickly.”

“We had never sought out any outside partnership,” Amiri said of his business, which employs 65 people at a 25,000-square-foot headquarters in downtown L.A.’s Arts District, and expects to generate sales of $60 million in 2019. “I met Renzo during a visit to L.A. a few years ago, kind of organically, and we talked more about product and creativity than anything. He always was there as a sounding board, encouraging me to shoot off questions. It was an easy friendship. We spoke a few times a week, and had dinners with our wives. When the discussions of having him be a part of what we’re doing came about, it wasn’t a hard decision.”

Amiri is looking to Rosso for help opening his own retail stores as soon as this year, he said, as well as broadening his offerings into tailored suiting and accessories, which will likely be manufactured in ateliers in Italy “with an L.A. spirit.”

“As we scale, I struggled with how do we expand globally while maintaining our integrity. He has a lot of experience scaling product but maintaining a spirit of creativity,” said the designer. “It’s a minority investment. We still retain full control of the company and independence. As we begin to move toward our own retail and broader category selections within the collection, it only makes sense to have someone who has 40-plus years’ experience in retail and creating luxury products on our side and as a voice in the room.”

Rosso praised Amiri’s ability to build a solid brand that has quickly garnered market space and a loyal following. “There is no need to change it, the brand will continue to be true to itself, but it will be able to tap into OTB’s assets and production development — it’s a win-win situation. We have started to talk about distribution and we have decided to open stores but we will have to fine-tune when, where and how. The brand’s sellouts are incredible and Amiri is available at the best stores around,” he said.

For Amiri, Rosso’s integrity won him over. “He’s very family-oriented. His organization is much bigger than ours, but the relationship he has with his team resonated. I watched him in his headquarters, he has his hands on product still. I aspire for that kind of enthusiasm and energy when I have 40-plus years in the business.”

While last year revenues decreased 5.2 percent to 1.44 billion euros impacted by the performance of the Diesel brand, the group’s main business, Minelli emphasized the strength of the group’s net financial position, totaling 111 million euros, up 32 percent compared with 2017 and net equity, which stands at 885 million euros.

Based on these financial resources, a more efficient structure and a simplified and integrated organization, the group will invest 200 million euros in the next three years on an industrial development plan and, in particular, the company pointed to the expansion of the current perimeter of OTB through M&A operations.

While growing Diesel into a global sportswear brand over the years, Rosso has been building a diversified fashion group under OTB. Rosso purchased a majority stake in Maison Margiela in 2002, appointing John Gallino creative director in 2014 (see it here). In 2008, he acquired a majority stake in Viktor & Rolf and in 2012, he bought Marni, in 2015 taking full control of the brand, naming Francesco Risso creative director, after the exit of founder Consuelo Castiglioni in 2016 (see it here).