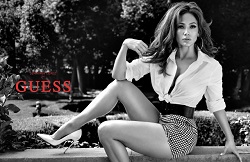 Last year, Lopez fronted Guess’ spring ad campaign, called on directly by cofounder Paul Marciano to be the next Guess girl, in a line of famous faces who have included Anna Nicole Smith, Claudia Schiffer, Gigi Hadid and Hailey Baldwin.

This time around, the Bronx-native inked a tour deal with the Los Angeles denim label. The new deal brings Guess along for Lopez’s “It’s My Party” tour with a range of concert T-shirts and a Lopez-inspired graphic denim jacket.

The tour started June 7 at The Forum in L.A. and includes more than 30 stops in the U.S. and Canada in June and July, including Madison Square Garden in New York, Prudential Center in New Jersey, American Airlines Arena in Miami, United Center in Chicago and Scotiabank Arena in Toronto.

Guess will provide custom pieces for Lopez’s back-up dancers and Lopez herself will wear Guess– and Marciano-branded pieces during fan meet-and-greets. On the merchandise side, Guess created a line of concert merchandise exclusive to the tour and to be sold within the venues. A few pieces from the line will also be sold in the company’s stores and online.

As more companies explore the potential in “merch-driven” capsules stemming from the continued consumer interest in the graphic T-shirt, concert merchandise isn’t a far stretch. It’s not the first time Guess has linked with an artist for tour capsules.